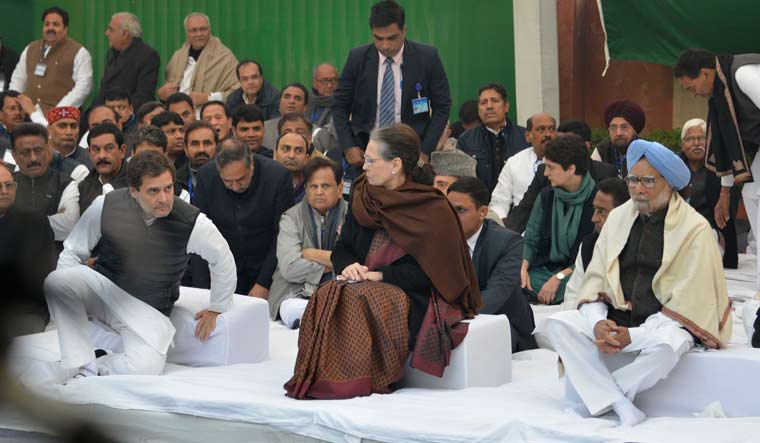 Congress president Sonia Gandhi, along with Rahul Gandhi, Manmohan Singh and other leaders, during an anti-CAA protest at Rajghat | Arvind Jain

Congress president Sonia Gandhi on Monday led a 'Satyagraha' of party leaders to protest against the Narendra Modi government's perceived attempts to rewrite the Constitution through the controversial Citizenship Amendment Act.

With Rajghat, Mahatma Gandhi's Samadhi, forming the backdrop, the party chose the Satyagraha mode to lodge its protest, with senior leaders taking turns to read the Preamble of the Constitution in different Indian languages, and the proceedings interspersed with patriotic numbers and devotional songs.

Rahul's presence on the stage generated keen interest since his visit to South Korea, described as an official one, at a time when the country erupted in protests against the CAA and the National Register of Citizens, had invited criticism from both within and outside the party.

The Satyagraha is among a series of events that the Congress has planned to protest against the CAA and the proposed NRC. The party's state units have organised marches in the respective states.

The Congress has also planned 'Save India-Save Constitution' flag marches in all state capitals on December 28—the party's foundation day. It has also decided to supplement the December 28 programme with other events since it was felt that the principal opposition party should be seen in solidarity with the popular, country-wide unrest against the CAA-NRC.