"There is involvement of PFI. They have connection with SIMI," said UP deputy CM 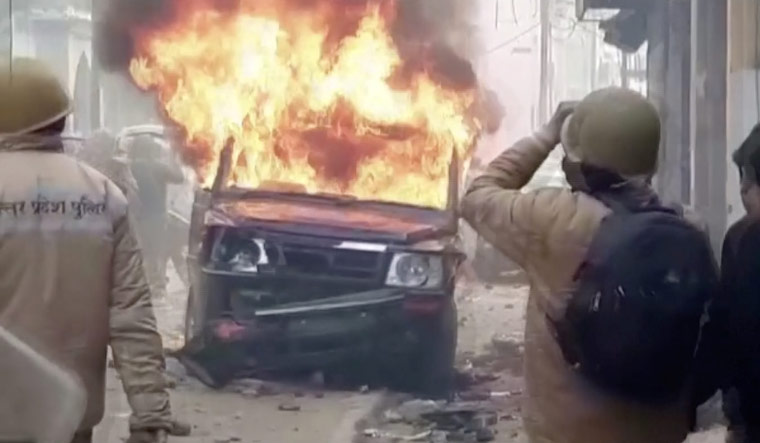 Demonstrations against the amended Citizenship Act continued on Sunday in various parts of the country though no major incident of violence was reported, while the BJP launched its counter-campaign to rally support for the contentious law which has been dubbed as "divisive" by the opposition.

Blaming "outsiders" for the violence during anti-CAA protests which has claimed 17 lives over the last few days in the state, UP Deputy Chief Minister Dinesh Sharma said authorities suspect that the culprits are linked to Islamic outfits PFI and SIMI.

"There is involvement of Popular Front of India [PFI]. They have connection with SIMI. Six people from Malda [in West Bengal] have been arrested," he said. Students Islamic Movement of India or SIMI is a banned terror outfit.

Sharma said that 62 police personnel suffered injuries  due to firearms during the violent protests. "About 500 empty cartridges of prohibited bore have been found. This indicates that the protestors were using illegal weapons," he said.

Authorities "detained" a four-member Trinamool Congress delegation from West Bengal led by former MP Dinesh Trivedi at Lucknow airport when it was heading to meet the families of those killed in the clashes, drawing sharp response from Mamata Banerjee's party.

"It is a clear case of murder. The bullets were fired first and then the stones were pelted. The Congress will fight for the families and ensure that justice is delivered to them. The party will raise this issue in Lok Sabha as well," she said.

UP authorities began a crackdown on vandals, sealing 67 shops in Muzaffarnagar and identifying the culprits in various violence-affected districts through video footage.

IG (Kanpur range) Mohit Agarwal said role of AIMIM workers and SIMI activists was being suspected behind Saturday's violence. "Cases have been registered against a large number of SIMI workers," he said.

Police said the situation remained by and large peaceful in the state capital and other districts like Meerut, Firozabad, Kanpur and Bijnor. Internet services have been suspended in several areas till Monday, while prohibitory orders remained in force across the state.

On a day Prime Minister Narendra Modi addressed a rally in the national capital and appealed for peace, a number of protests against the amended Citizenship Act were held in the city even as police maintained a strict vigil and carried out flag march in sensitive areas.

Although the Delhi Police made elaborate arrangements to ensure that there was no protest around the rally venue, Ramila Ground, areas like Jantar Mantar, Jamia Millia, Nizammudin, and Connaught Place witnessed multiple peaceful demonstrations.

"The citizenship law or the NRC has nothing to do with Indian Muslims. They have nothing to worry," Modi said at the rally in a bid to allay concerns of the community, and condemned the violent protests, telling rivals they "can burn his effigy and thrash it with shoes if they wish", but they should not target the poor.

Protests against the amended citizenship law by Congress, Left and other parties and outfits, and counter-protests by BJP and Hindu organisations were held in many states.

Many top BJP leaders, including Union Ministers, defended the CAA at events organised by the party in several the states. Union Minister Nitin Gandkari addressed an event backed by the RSS in Nagpur, while BJP working president J P Nadda was in Indore

In Bengaluru, a 31-year-old man was allegedly attacked with sharp weapons by a group of people while he was returning from a demonstration in support of the CAA, police said, adding his condition was stable they were examining CCTV footage to track the assailants.

Rajasthan Chief minister Ashok Gehlot led a peace march in Jaipur on Sunday and said his government will neither implement citizenship amendment act (CAA) nor national register of citizens (NRC) in the state.

He said that 8-9 states, including Bihar and Odisha, have said that they will not implement NRC.

In West Bengal, state minister and state president of Jamiat-Ulema-e-Hind Siddiqullah Chowdhury threatened that Union Home Minister Amit Shah will not be allowed to step out of the airport when he visits the city, if the law is not immediately withdrawn.

"We may not allow him [Shah] to step out of the city airport if necessary. We may gather one lakh people there to stop him," he said at a Jamiat-Ulema-e-Hind rally against the CAA at Rani Rasmoni Avenue in Kolkata.

Curfew was lifted in Shillong as no report of violence or arson over the amended citizenship Act was reported from any part of the city. People were seen flocking to local shops to buy essential items and prepare for Christmas in Christian-majority Meghalaya.

However, in Manipur, the state government has imposed prohibitory orders in Imphal West district for two months in view of the continued protests against the new citizenship law

The fight against the new citizenship law is "not just the issue of Muslims" but concerns all Indians and there should be a sustained struggle against the legislation, AIMIM president Asaduddin Owaisi said late Saturday night at a meeting organised by the United Muslim Action Committee, an umbrella body of various Muslim groups at Darussalam, the headquarters of AIMIM in Hyderbad.

Around 500 members of Islamic outfits and scores of CPI(M) activists staged demonstrations in Chennai on Sunday as protests continued against the Citizenship Amendment Act in parts of Tamil Nadu.

While members of the Islamic outfits, including women, staged a protest holding placards in Chepauk, CPI(M) cadres distributed pamphlets in Thousand Lights area.

In Madurai, activists of Campus Front of India and an Islamic outfit were booked for staging a protest against the CAA on Saturday without taking permission, police said

"We have booked cases against around 2,000 members, including those from Campus Front of India and another Muslim outfit", a senior police officer told PTI.

Students have called for boycott  of the convocation at the Pondicherry University over police action against protesters during anti-CAA protests.

Curfew clamped in Mangaluru in Karnataka in the aftermath of the violent protests on December 19 was lifted on Sunday for 12 hours from 6 am, as no untoward incident was reported from the city.

The Karnataka government announced an ex-gratia of Rs 10 lakh each to the families of the two men killed in police firing during protests in Manguluru on Thursday.

Janata Dal-S leader and former Chief Minister H D Kumaraswamy on Sunday visited the families of the two men at Kudroli and handed over a cheque of Rs five lakh each to them on behalf of his party.

A pro-CAA rally organised by the BJP, RSS and affiliated organisations was held at the Town Hall. Local MP Tejasvi Surya led the demonstration.

"Only 10 to 20 per cent people in the country are opposing the CAA. Congress leaders should think what would happen to it (the party) when 80 per cent of the people will decide to support the CAA and hit the streets?"  BJP national general secretary Kailash Vijayvargiya said at a "thanksgiving" programme organised by the BJP in Indore in Madhya Pradesh in support of the CAA, which was also attended by Nadda.

The law grants Indian citizenship to non-Muslim refugees from Afghanistan, Pakistan and Bangladesh, who have come to India till December 31, 2014.