How these poems have defined anti-CAA protests 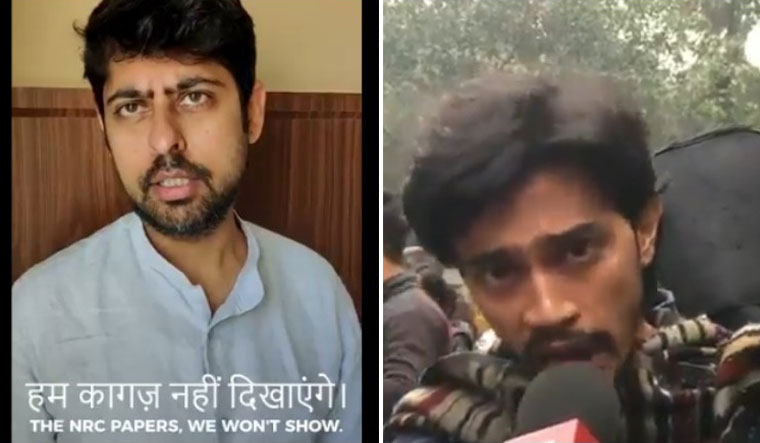 The protests against the Citizenship (Amendment) Act, 2019, over the past two weeks have rocked the country. The agitations, which started from Assam, Manipur, Tripura and Meghalaya over the National Register of Citizens (NRC), soon spread to the national capital and other parts of India over the CAA, which was enacted on December 12.

Things took an ugly turn when, on December 15, police entered Jamia Millia Islamia and Aligarh Muslim University campuses and, allegedly, unleashed brutalities on the students, who claimed they were protesting peacefully.

Almost all the major cities in the country has seen anti-CAA protests. Amid violent agitations, novel ways of protest have emerged, such as the shirtless one by students, the 'rose' protest, and, of course, registering dissent through humorous posters and powerful cartoons, slogans and poems.

While the azadi slogan has been the go-to chant for protesters, a couple of Hindi poems have caught the imagination of the people. One of them is by National Award-winning lyricist and comedian Varun Grover (though he does not claim copyright to the words) and is called 'Hum Kaagaz Nai Dikhaenge', referring to the documents required to be named in the NRC. It was shared by Congress MP Shashi Tharoor and CPI(M) general secretary Sitaram Yechury, too.

Here's the poem and its translation in English posted by Grover himself:

Inspired by the spirit of every protestor and India-lover. With hat-tips to Rahat Indori saab and the Bangla slogans.

(There is no copyright on these words - feel free to use them, adapt, sing, modify, create.) pic.twitter.com/bJZULAAvR8

The other one was recited in Hindi by singer Aamir Aziz, who has sung popular numbers like 'Achhe Din Blues’ and ‘The Ballad of Pehlu Khan’. He was a civil engineering student at Jamia Millia Islamia.

Amir has something utterly beautiful to say. @BBCWorld | #IndiaAgainstCAA_NRC pic.twitter.com/LjEaDtlsXV

Here's the rough translation in English:

You can definitely kill us with your bullets [2]

But, that we will definitely die of these bullets, that is not necessarily so

It is definite that we fear death, but it is not necessary that we will be frightened by that fear

My motherland is Hindustan

Muhammad is my messenger

Allah is my god

Ambedkar is my teacher

Buddha is my start

Nanak is my guru

Peace is my religion

Love is my faith

I refuse to be frightened by this fear, I refuse to die an untimely death

I refuse to tolerate this atrocity

Refusing to tolerate atrocity is the first step towards revolution

I refuse to take a step back

That the decision on my life is taken by a 7-hour debate in Parliament, I refuse to accept this [2]

That my identity be decided by a paper, I refuse to accept this

That in my own country I be given alms instead of rights, I refuse to accept this [2]

To call a curfew democracy, to call hatred a rule [2]

Those who call falsehood the truth,

Every such action of the tongue, I refuse to accept.

Another poem that caused much controversy was 'Hum Dekhenge', which was penned by famous Pakistani revolutionary poet Faiz Ahmed Faiz against the authoritarian regime of former Pakistan president Zia-ul Haq. A gathering of students at IIT-Kanpur sung lines from this poem as part of the anti-CAA protests, but a college professor took offence at some words in the poem and shot off a letter to the authorities, complaining the students were raising 'anti-India' and 'communal' slogans.

The students, however, refused to back down, saying that the lines were taken out of context and given a communal twist by right-wing propagandists.