Survival test for BJP govt: All you need to know about the Karnataka bypolls tomorrow

The results will be declared on December 9 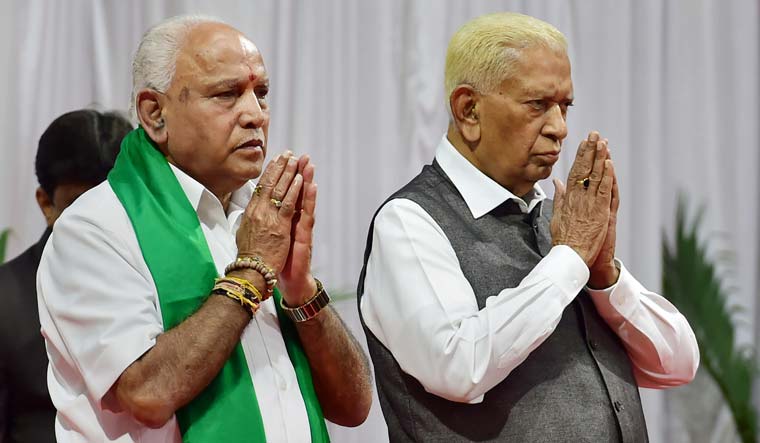 The high-octane campaign for the bypolls tomorrow in Karnataka, that will determine the future of the BJP government in the state, ended on Tuesday. 15 assembly constituencies will go to polls. The stability of B.S. Yediyurappa government will be at stake if the party fails to win at least six of the 15 seats. At present, BJP holds 105 seats in the assembly with a current strength of 207, and has the support of independent MLA and minister H. Nagesh. The 15 constituencies that will go to the bypolls are Athani, Kagwad, Gokak, Yellapur, Hirekerur, Ranibennur, Vijayanagar, Chikballapur, KR Puram, Yeshwanthpur, Mahalakshmi Layout, Shivajinagar, Hoskote, KR Pet and Hunsur.

While most of the constituencies going for the bypolls face a direct contest between Congress and BJP, in the southern parts of the state, JD(S) comes into the picture, making it a triangular fight. The results will be declared on December 9.

The bypolls were necessitated after the resignation and absence during the trust vote of 17 Congress-JD(S) legislators, which led to the collapse of the H.D. Kumaraswamy headed coalition government and paved the way for BJP to come to power. The 17 legislators were subsequently disqualified by the then speaker K.R. Ramesh Kumar. However, the Supreme Court heard the MLA's petition challenging the disqualification last month, and allowed them to contest the bypolls. The bypolls were earlier slated for October 21 but the EC had deferred them to December 5 after the apex court decided to hear the petitions of the disqualified MLAs.

The Congress and the JD(S) ran a coalition government for 14 months in the state and contested the 2019 Lok Sabha polls in alliance, but parted ways after the collapse of the H.D. Kumaraswamy ministry in July, following the rebellion by 17 MLAs. There was definite ice between the two parties after the fiasco, with former Congress chief minister Siddaramaiah and JD(S) leaders H.D. Deve Gowda and Kumaraswamy indulging in a war of words, accusing each other as responsible for the collapse of the coalition. Among 15 constituencies going to the bypolls, 12 were held by Congress and three by JD(S).

The JD(S) has mostly concentrated its campaign in constituencies that the party feels it can win, including KR Pete, Yeshwanthpura and Hunsur. The regional party, that had fielded candidates in 14 constituencies and decided to support BJP rebel and independent candidate Sharath Bachegowda in Hoskote, faced a setback with its nominees in Athani and Hirekerur, withdrawing candidature at the last moment.

Siddaramaiah said on Tuesday that the party leadership will take a call on possible tie-up with JD(S) to form a government in case the ruling BJP fails to retain its majority. His statement came even as several of his party colleagues maintained that they were not averse to the possibility of a post by-poll alliance. "No, no such things, High Command will discuss and decide about it," Siddaramaiah told reporters in Hunsur in response to a query on discussions on alliance with JD(S). Earlier speaking to reporters in Mysuru, he said there was no internal understanding between Congress and JD(S) during the bypolls, and both parties were seriously fighting against each other.

JD(S) patriarch H.D. Deve Gowda on Monday said he will work for strengthening his party keeping both the BJP and Congress at a distance. Speaking to reporters at Belagavi, he said "Keeping both at a distance, saying namasakara to both of them, I will work beyond my limits to strengthen my party." Kumaraswamy too had said there would be a stable government in the state after the bypolls, but not necessarily that of BJP, as he asked mediapersons to wait for the results of the bypolls to 15 assembly constituencies to be declared on December 9. Kumaraswamy on Monday maintained that JD(S) will take a decision in the interest of the people of the state after the bypoll results. Speaking to reporters, he said "it is too early to discuss about it. Let us see how the numbers will stand after the results."

Trial by fire for the BJP

Karnataka Chief Minister Yediyurappa maintained that the BJP will win all the 15 seats, and there will be a stable government for three and half years in the state, without support from any other party. The BJP, which needs to win six seats, has fielded 13 of the 16 disqualified Congress-JD(S) legislators who joined the party as its candidates from their respective constituencies. But, not all is well within the party ranks. BJP faces dissidence within as aspirants expressed displeasure, but attempts were made to pacify them by making them heads of boards and corporations. At Hoskote, Sharath Bachegowda rebelled (now a candidate supported by the JD(S)), leading to to his expulsion, while, in Kagwad, BJP's Raju Kage joined Congress and is now its candidate. There was rebellion in Vijayanagara and Gokak too. In the midst of all this, Congress's Dinesh Gundu Rao claimed disqualified Congress legislators like Byrathi Basavaraj, S.T. Somashekar and Munirathna—now BJP candidates—said they wanted to re-join the party, a request which was turned down.