Karnataka bypolls: Parties put up show of strength on last day of nominations 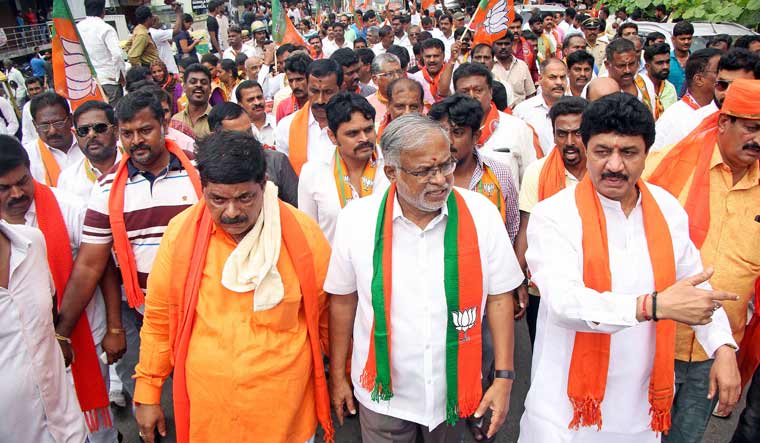 Karnataka's Education Minister Suresh Kumar during a road show in support of K. Gopalaiah, BJP's candidate for Mahalaxmi Layout constituency, on their way to file the nomination papers for assembly by-elections, in Bengaluru | PTI

On the last day of filing nominations for the December 5 bypolls to 15 constituencies in Karnataka, the political parties held massive rallies in a show of strength and senior party leaders accompanied the candidates in each constituency to file the nomination.

In Belagavi, the epicentre of the mass rebellion that brought down the JD(S)-Congress coalition government in last July, the clash between the Jarkiholi brothers has stirred intrigue. In Gokak,  the disqualified MLA from Congress Ramesh Jarkiholi, who joined the BJP recently, will be fighting his younger brother Lakhan, who has the backing of his elder sibling and Yamakanamardi MLA Satish Jarkiholi. Satish, who has vowed to defeat Ramesh, has also filed his nomination as a back up. Interestingly, Lakhan's contest has brought together Satish and his old foe—Belagavi rural MLA Lakshmi Hebbalkar for the campaign.

In Athani, BJP nominee and disqualified MLA Mahesh Kumathalli will be taking on Gajanan Mangsuli of the Congress and Gurudasyal of the JD(S). Deputy Chief Minister Lakshman Savadi, also BJP's defeated candidate in the May 2018 polls, accompanied Kumathalli to file the nomination, sending out a strong message to the party cadres to work for the party candidate.

In Kagwada, BJP rebel Raju Kage, who was upset over his party fielding disqualified Congress MLA Shrimant Patil, filed his nomination from the Congress. The JD(S) which has little presence in north Karnataka region, fielded Srishaila Thubashetty.

Chief Minister B.S. Yediyurappa, who took part in a rally in Hoskote, surprised everyone by announcing that BJP nominee in Hoskote M.T.B. Nagaraj would be made a minister within 24 hours after he wins the seat. Nagaraj, one of the 17 disqualified MLAs, will be taking on BJP rebel Sharat Bachegowda, who was the defeated candidate in last polls. The Congress party has fielded Padmavati Suresh, wife of Congress MLA from Hebbal Byrati Suresh, while JD(S) is supporting independent candidate Sharat Bachegowda, who has now been expelled from the BJP. Nagaraj reminded his voters that he had to resign for the sake of the constituency as the previous coalition government did not support any development. He also alleged that former chief minister and fellow Kuruba Siddaramaiah was sidelining all the Kuruba leaders including him.

In Yellapur, Vijayanagar and Hirekerur, disqualified MLAs Shivaram Hebbar, Anand Singh and B.C. Patil respectively filed their nominations from the BJP. The Congress has fielded Bheemanna Naik, Venkatrao Ghorpade and B.H. Bannikod respectively. The JD(S) sprang a surprise by fielding a Lingayat seer—Shivalinga Shivacharya Swami of Rattihalli in Hirekerur and Chaitra Gowda, a political novice from Yellapur and former minister N.H. Nabi from Vijayanagar.

Chikkaballapur was brought to a halt after both the Congress and the BJP held massive rallies enroute filing nomination. While  BJP nominee Dr K. Sudhakar arrived along with Deputy Chief Minister Dr Ashwathnarayan and Tourism Minister C.T. Ravi, the Congress nominee M. Anjinappa was accompanied by Congress strongman D.K. Shivakumar. JD(S) nominee K.P. Bachegowda, who was initially reluctant to contest, filed his nomination.

The BJP nominated disqualified MLAs—S.T. Somashekhar, K.  Gopalaiah, Byrati Basavaraj—in three of the four Bengaluru seats, Yeswantpur, Mahalakshmi Layout and KR Puram. It fielded  former corporator M. Saravana in Shivajinagar. While the Congress has fielded two MLCs, the JD(S) was on the lookout for "strong" candidates to take on the rebels who brought down the coalition government.

Roshan Baig, the only disqualified Congress MLA who was not inducted into the BJP over his alleged involvement in the multi-crore IMA scam, chose not to contest the bypolls. The Congress has fielded Rizwan Arshad, who had lost the Bengaluru Central seat in the previous Parliament elections. Here, the JD(S) has fielded its national spokesperson Tanveer Ahmad.

In KR Pet, JD(S) nominee B.L. Devaraj's supporters allegedly threw footwear at K. C. Narayana Gowda, the BJP nominee, for "betraying" the party. Gowda is one of the three disqualified MLAs from the JDS (apart from A.H. Vishwanath and Gopalaiah) to join the BJP.

In Ranebennur, the BJP fielded Arun Poojar in place of disqualified MLA R. Shankar who has been promised an MLC seat and a cabinet berth by the chief minister. The Congress has nominated former speaker K.B. Koliwad, while the JD(S) has fielded Mallikarjuna Halageri.

The bypoll in Hunsur will be a prestige battle for Kuruba strongman Siddaramaiah, who is drawing strategies to defeat fellow Kuruba and BJP nominee A.H. Vishwanath, who previously held the seat. Vishwanath will take on H.P. Manjunath (Congress) and Somashekhar (JD(S)).

The bypoll has sure triggered rebellion within the parties in a state that is witnessing political realignment, too. If the saffron party is facing problem after it inducted rebels from other parties, the Congress and the JD(S) have dearth of strong candidates in many constituencies.

The BJP, which is the beneficiary of the mass revolt that toppled the coalition, is now walking the tight rope as it will need at least six seats out of the 15, to remain in power.