IIT student death: Father says IIT did not allow them into her hostel room 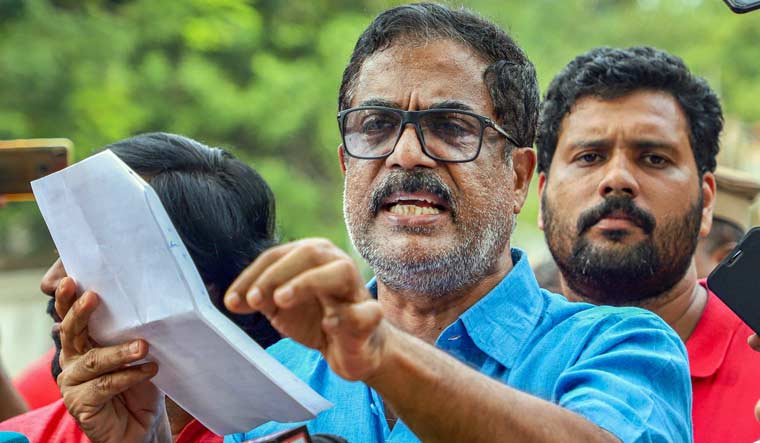 Father of Fatima Latheef, who was found hanging in her hostel room at the IIT- Madras, addresses media after meeting with DGP in Chennai on Nov 15 | PTI

Emotions ran high as Abdul Latheef emerged after meeting with the team of police officers who are enquiring into the death of his daughter Fathima Latheef, who killed herself at her hostel room in IIT Madras. Abdul Latheef, who was accompanied by a few relatives and friends expressed confidence in the state police. He said how IIT Madras did not get in touch with the family after the death of his daughter. Abdul along with his relatives had arrived in Chennai to meet with the state DGP regarding the investigation into his daughter’s death.

Addressing the media after his meeting with the team of police officers and the Tamil Nadu DGP LK Tripathy, Fathima’s father Abdul condemned IIT Madras and said that the institution did not get in touch with them even once after his daughter’s death. “IIT did not get in touch with me following my daughter’s death. There was absolutely no response from the institute, even when we went to collect my daughter’s body.” Abdul also alleged that the IIT Madras had washed its hands off the incident. He said that the family was not allowed to even collect Fathima's belongings from her hostel room. “We do not know how the post mortem and embalming had happened. We were not allowed during the process,” he alleged. He also criticised IIT management for not allowing them to get access to any CCTV footage on the day of her death. “The institution did not handover any CCTV footage on the day of my daughter’s death, even when they had promised to do so.”

Stating that his other daughter, Fathima’s sister had asked for all the CCTV footages of the library, mess, hostel, rear side of the hostel recorded on the day of Fathima’s death, Abdul said that the IIT principal promised to give it to them within two hours. “We were not allowed to click pictures inside her room. We do not know where she had got the rope for hanging herself. There was no rope in the room when we got into the room and all her things were lying scattered. I suspect someone had entered her room after her death,” Abdul alleged.

Stating that his daughter had informed them earlier about harassment from the professor, Latheef said she had named him in her mobile notes. He alleged that the professor was prejudiced towards Fathima as she constantly topped in all her subjects. “I have given all these details and documents to the police. I will fully cooperate during the enquiry. I shall be in Chennai during the enquiry,” Latheef added.

Abdul also added that Fathima had the practice writing a diary, mentioning day-to-day activities and her everyday experiences. He believed the police will be taking into account all this and also her emails to the professor Sudarshan Padmanabhan. “She had mentioned that he was a bad man during the conversation with us. She was even scared to attend his classes. It was her friend who got her mark sheet from the professor. She was scared to get it from him,” he added. Stating that the family had seen the emails in which the professor had asked her to meet him for the additional five marks, he said, “she had scored 13 out of 18 marks.” Expressing belief in the police investigation and the chief minister Edappadi K Palanisami whom he called on yesterday, Abdul said, no other student should get killed like Fathima hereafter.