The 'severe' smog: How much longer will Delhi suffocate? 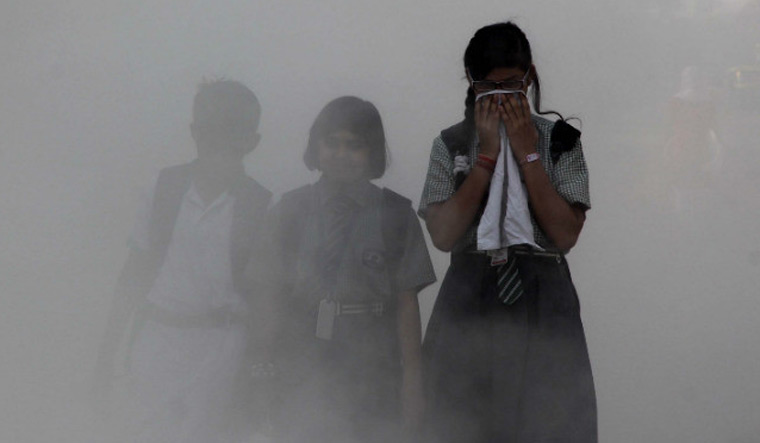 An unexpected school holiday brings an instant smile on the faces of children. On the evening of November 13 however, when it was announced that schools in the National Capital Region would be shut for the next two days, the school children were disappointed as they were looking forward to the Children's Day celebrations on November 14. Most of them ended up spending the day cloistered at home, in front of television set for the larger part of their time. The schools were shut under orders from the Supreme Court mandated anti-pollution body, the Environmental Pollution Control Authority (EPCA).

The news that schools will have to hold classes on Saturdays once the air clears up, to make up for time lost due to pollution breaks, has only brought further gloom on a day when the sun has barely been able to poke its way out of the noxious blanket of smog shrouding the region.

The forecast was that the air quality over the region was worsening. And on November 14, the overall Delhi Air Quality Index (AQI) remained at the higher end of 'Severe', according to the ministry of earth sciences' air monitoring division, the System of Air Quality and Weather Forecasting and Research (SAFAR).

According to SAFAR, satellite images of farm fires on November 13 counted only 69 stubble fires. However, the agency pointed out that the figure itself may not be too accurate since November 13 had been a day of dense clouds, which impaired the satellites' ability to detect the images. Considering the PM2.5 deficit with and without fire in the SAFAR analysis, fire emissions appears to be higher and fresh biomass contribution is around 13 per cent. However, since there is already accumulated PM2.5 in the air due to poor winds, the “sustainable cumulative impact of stubble intrusion on November 14 is estimated to be more than 30 per cent.''

The Delhi government has imposed a vehicle rationing system. Though the odd-even system did reduce traffic congestion on roads, its efficacy as a pollution countering method is still under question. The Supreme Court, on Wednesday, issued a notice to the Delhi government, following a public interest litigation challenging the odd-even system. The court sought daily data since the day the scheme was launched this year—November 4. It has also sought data from the state government, the Centre and the Central Pollution Control Board (CPCB) on pollution levels over the NCR since October this year, as well as data from October to December last year. Delhi Chief Minister Arvind Kejriwal had spoken about the likelihood of extending the car rationing on popular demand, and also because the air had not cleared. But with Wednesday's development in the court, there is no new announcement of an extension so far.

A Western Disturbance has started to affect north-west India, bringing scattered rain to Punjab, the state where the stubble fires are raging. Thus, experts feel that the fire count may come down over the next two days. Another small cheer is that the winds may also change, and thus may not bring more stubble smoke this way. The stubble burning contribution to the air pollution might reduce to only around five per cent by Friday. The air quality will improve on Friday, but so marginally that the AQI will still remain in the 'Severe' category till Saturday, when an increase in wind speed may improve the quality and put it in the 'Very Poor' range. But Sunday, stronger winds are expected to bring some more freshness over the NCR cities.

Under EPCA orders, construction activity in the region has halted completely since late November 5 (before that, it was allowed for only some hours a day). Builders say this ban will have a negative impact on delivery of projects.