How life in Ayodhya changed a year after Babri demolition

The going got tough for families in the acquired area 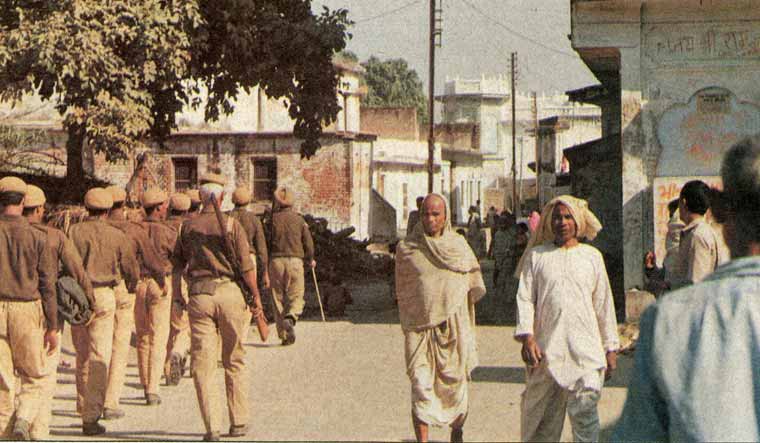 This story originally appeared in THE WEEK issue dated December 5, 1993

At normal times Ayodhya looks so peaceful that it is hard to believe that it was the centre of a political and religious storm which shook successive governments and repeatedly plunged the country Into turmoil. With no major event occurring in the last one year since the disputed structure there was demolished on December 6, the temple town has regained some of its old, tranquil atmosphere. But none of its residents has forgotten the events of that black Sunday.

The makeshift temple that was erected on December 7 has not changed at all, except that the idols are now better fortified against the elements. Darshan is permitted for three hours In the morning and three hours in the afternoon; entry is barred after sunset. A thousand pilgrims still visit the temple everyday and they are allowed darshan of the idols from a distance of 15 feet. "On festival days, such as the Panchkosi and Chaudkosi parikramas held recently, the number of pilgrims crosses 15,000," said one of the assistant pujaris of the shrine.

The place where the temple stands and the land surrounding it are the property of the Central government now. In January this year, it took over 67.7 acres surrounding the shrine, through an ordinance. The Sunni Central Wakf Board has challenged the acquisition in the Supreme Court, but the hearings have been inconclusive. "When the BJP government had taken over the area, the court ruled the step illegal," said Ramchandra Paramhans, president of the Ram Janmabhoomi Nyas and mahant of the Digambar Akhada. "But when the Central government took the same step, the court did not say a thing."

The acquired area has been fenced and six watch-towers have been erected. Come nightfall the entire area is bathed in floodlights. Eight companies of the Provincial Armed Constabulary guard the outskirts of the town, while another three companies of the Central Reserve Police Force are stationed around the shrine. About 15 houses, an equal number of temples and dharmashalas, and a couple of mosques have fallen within the ambit of the acquired area, creating innumerable problems for the people residing in them.

"Only the pujaris have been allowed to remain in the temples, all their disciples and the pilgrims residing in the dharmashalas have been turned out," said Mahesh Narayan Singh, head of the local unit of the Vishwa Hindu Parishad. "There is complete police raj within," added Ramchandra Paramhans. "The families staying there are being asked to leave, but there is no talk of alternative accommodation for them." When the fencing operation began in early October, the administration, in typically insensitive fashion, fenced off even the roads and the entrance to houses in the area. Only after an agitation by the BJP did the administration remove these fences.

The District Magistrate, Bhagwati Prasad Verma, admitted that all the people living in the acquired area are being asked to move out. "A spacial office has been set up to deal with compensation claims," he said. But very few have left, with most claiming that they have nowhere to go. "We have that half-constructed Sheshavatar temple and about Rs 1 crore worth of building material on the land acquired by the government. None of them has been returned to us," said Mahesh Narayan Singh.

The Muslims of Ayodhya, numbering over 4,000, who had fled the town before the traumatic events of last year, have all returned. Apart from the disputed structure, 22 mosques, 150 graves and 270 houses had been burnt, dug out or damaged, as kar sevaks, or as some Hindu leaders believe, goondas in the guise of kar sevaks, went berserk once the shrine was brought down. But now all is well: the Muslims have all returned, their houses have been repaired, and all but four mosques have been fully restored.

"The administration helped to a very limited extent. The compensation was far from adequate but a lot of relief came from private sources throughout the country. We have all been able to resettle ourselves as comfortably as we were before the destruction," said Mohammed Hashim, resident of Ayodhya and member of the Babri Masjid Action Committee (BMAC).

What are his relations with his Hindu neighbours now? "Our relations have always been excellent. It was the outsiders who came and instigated the local people," said Hashim. What was the atmosphere like during the recent elections? "Absolutely peaceful and free from tension," declared Hashim. "Muslims voted without fear and they voted in very large numbers."

The Muslim ire against the Congress, however, remains as strong as ever. Said Jalaluddin, who owns a bicycle repair shop: "We will never forgive the Congress. Recently Najma Heptullah (Deputy Chairman of the Rajya Sabha) visited us. She was asked all kinds of questions but she could not give convincing answers. She just kept saying: 'Forgive us our mistakes.' But no Muslim will forgive."

Do they want the masjid rebuilt? Do they seriously expect it to be? "We certainly do," said Mohammed Hashim. "The makeshift temple was built under President's rule, when the Congress was effectively ruling UP, since the BJP had already been dismissed. It was the Congress which allowed that temple to be built, and it is the Congress which will have to remove it."

The Central government has talked of setting up trusts to build both a temple and a mosque, but concrete steps have yet to be taken. The latest hasty move is the formation of a Ramalaya Samiti. Headed by Swami Swaroopananda, Shankaracharya of Dwarkapeeth, it comprises 30 members, four of whom belong to Ayodhya. Three of the members from Ayodhya—Sitaram Sharan Das of the Laxman Kila temple, Swami Kaushal Kishore Phalahari, and Purushottam Maharaj of the Sugriv Kila temple—have, however, dissociated themselves from the samiti. The fourth, Jugal Kishore Saran, is a smalltime sadhu.

"What is wrong with the Ram Janmabhoomi Nyas?" asks Paramhans. "In what way is the other trust going to be different? It was said the second trust would comprise non-political people. Is Swaroopananda non-political? He has been a strong Congress supporter all his life."

Another bone of contention is the precise location of the proposed mosque and temple. The Congress has not specified where exactly, within the acquired area, the temple will be built. But most people are certain that the idols will remain where they are, and a temple will eventually surround them, no matter who builds it. "During the election campaigning, the Congress candidate, S.P. Singh, was perhaps more vociferous than the BJP candidate Lalloo Singh about building the temple," alleged Mohammed Hashim.

A bigger controversy is the location of the mosque. "Swaroopanand says the mosque and the temple should be far away from each other. The azan (call to the faithful to come for prayer) from the mosque must not reach the devotees at the temple; nor must the sound of the temple bells reach those at the mosque," said Mahesh Narayan Singh. "But that may mean building the mosque outside the area that has been acquired. Swaroopanand says the temple alone will require about 100 acres, so where is the place for the mosque?" "They are just confusing the people," says Paramhans. "A mosque should be constructed in a Muslim-dominated area, or else it has no meaning. We don't want any new mosque in Ayodhya."

Mahesh Narayan Singh admitted that the RSS-VHP leaders had not yet taken any concrete step towards construction of the temple. "But there have been so many problems, especially the ban on the VHP," he said. But we are holding a meeting during December 12-14 to finalise a new strategy."