Replug: How PM P.V. Narasimha Rao picked up the pieces after Babri demolition 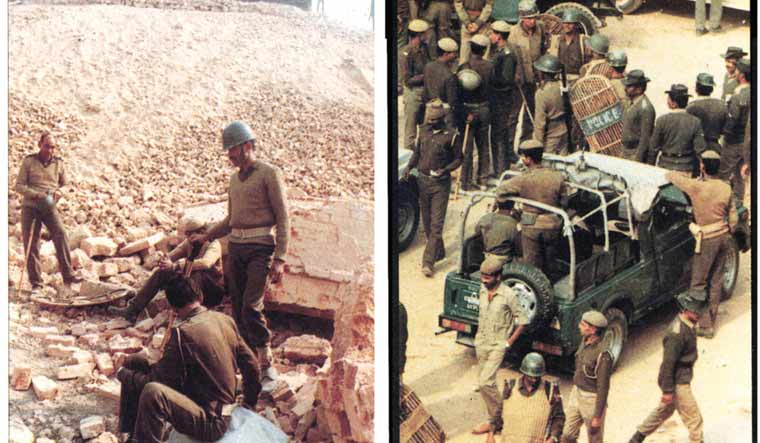 Down in the dumps. Cops at the disputed site | Krishan Saith, Ravinder Reddy

As kar sevaks milled into Ayodhya and mocked at the massed but immobilised Central troops in Faizabad next door, half a dozen leftist MPs drove up to the Prime Minister's office in Delhi. In the gathering dusk, they made a last-minute appeal to P.V. Narasimha Rao to take control of Ayodhya because they suspected the real intentions of the sangh parivar. "Avert a disaster," pleaded the CPI(M)'s Somnath Chatterjee. The glum-visaged head of government listened patiently and explained what he had done and also the assurances the Kalyan Singh government gave the Supreme Court. The Sanskrit scholar narrated a sloka, which the delegation did not comprehend. For their benefit he translated: "For doing any work, seven steps have to be taken. One takes the first six steps and leaves the seventh to God. I have taken the six steps." Next day, the insensitive God to whom Rao left the seventh step did not oblige the devout believer in karma.

Unless Rao and the Vishwa Hindu Parishad had prayed to the same God! This fatalistic attitude of Rao, coupled with the cynical kar sevaks' disregard for the rule of law,  brought down the structure and much else precious to secular India. Both the Prime Minister and the nation had been betrayed. As in 1990, the state was pitted against the forces of Hindutva but with a crucial difference. Then, the governments at the Centre and Uttar Pradesh, under V.P. Singh and Mulayam Singh Yadav, respectively, stopped the RSSVHP-BJP combine from building the temple at the disputed spot. They had refused to allow L.K. Advani to even lay five bricks as a symbolic gesture.

Narasimha Rao and his government repeatedly said it did not want bloodshed; reason why it refused to sack the Kalyan Singh ministry. But blood was shed, perhaps much more than what would have been shed if the structure was saved and the kar sevaks dispersed. "A leader cannot sit silently hoping for things to turn out right. He must know when to take risks," fumed Rao's predecessor Chandra Shekhar, who had on December 6 called the Prime Minister thrice to persuade him to take action. The sheer inertia of the Centre infuriated its foes and admirers alike.

The fine sense of balance on the high wire, which won him many friends since he assumed office, deserted Rao. The opposition had warned him. The Supreme Court had, as early as November 27, observed that 'if lakhs of people gather at Ayodhya on December 6, no force on earth can prevent them from doing what they want'. The court had given Rao a free hand to take any constitutional step he wanted. Rao fumbled and that proved calamitous as a communal bloodbath erupted across the country. More importantly, grave doubts arose about the credibility of the system. Justice M.N. Verikatachalliah of the Supreme Court said that the Kalyan Singh government's actions were beyond mere contempt. The Constitution, according to the judge, had collapsed in Ayodhya. Like the public order which collapsed elsewhere as a consequence.

Narasimha Rao's own reputation collapsed. His four strong points— credibility, ability to judge men and matters, consensus approach and ability to take tough decisions at the right time—suddenly looked suspect. The Central government, much more than Kalyan Singh, was the guarantor to the nation—both through its commitments to the courts as well as the Congress manifesto—for protecting the disputed structure in Ayodhya until a settlement was reached either by negotiation or judicial verdict. Its credibility took a knock because it did not raise a finger to save the structure. Grave doubts have arisen about its capacity to act in another crisis, which could involve external aggression.

Those who had been crying hoarse about the ulterior motives of the BJP— the National Front, Left Front, Muslim leaders and prominent Congressmen like Arjun Singh—have been proved right. Rao's game-plan to manage the sangh parivar with its hordes of sadhus, khakhi-clad swayamsevaks and political leaders and secure them to the ambit of judicial orders proved dubious. His lament that he and the nation had been betrayed would have deserved sympathy but for the iron rule of governance that 'you shall not allow yourself to be betrayed, even if it means betraying others'. "How could the Prime Minister of a country be so gullible?" scoffs V.P. Singh, who is keen on seeing Rao join the ranks of ex-Prime Ministers.

Rao had all the mandates he needed—from the Congress Working Committee, Congress Parliamentary Party, his cabinet and the National Integration Council, barring the BJP. "No other Prime Minister had got such a massive support to protect the structure. Our party even got a resolution passed in the West Bengal assembly approving the dismissal of the Kalyan Singh government," fumed Harkishen Singh Surjeet, the Marxist chief, who, nevertheless, rushed to Rao's rescue much to the consternation of his 'natural ally' V.P. Singh.

The Constitution has enough provisions to rein in a recalcitrant state— from issue of directives to dismissal. Basically, Rao's cabinet had to make a political judgment which it never did despite its daily sittings. Home Minister S.B. Chavan, who in July had been convinced that 'there was prima facie violation of court orders' only wrote long letters to Kalyan Singh. "Why did you not issue a directive under the Constitution much before the kar sevaks had gathered?" the Muslim League's Ebrahim Sulaiman Sait taunted Chavan. Congressmen, who had gathered to protect their Prime Minister, were openly crying for Chavan's scalp. But since Rao had decided his government was in no way responsible for the demolition, he did not even make a token sacrifice.

Rao's famed consensus approach too, came a cropper. Arjun Singh had been arguing against dialogue with the BJP even before the party's Tirupati session. He wanted Rao to wield the stick against the BJP and its sister organisations. Rao skirted the confrontation option, only to be swept into it as his post-demolition decisions showed. But then again, he was at his dithering best when it came to announcing that the mosque would be rebuilt or in banning the five communal organisations. The timings of his decisions (or non-decisions which have been described as decisions by his admirers) had gone awry.

Rao survived the hour of crisis thanks to a quick mustering of the faithfuls in the Congress, but the question of repairing the damage done to the polity by the demolition was not something as easily manageable as the Congress MPs. It was Rao's capacity to govern the nation which was suspect. The non-BJP opposition drove home the point when it paralysed Parliament with demands for his ouster.

Perhaps the second important issue debated in Delhi's political circles on December 6 was whether the Prime Minister will go—either on his own or because of a coup in the Congress. "It is all in his mind," was the cryptic remark of a minister after the cabinet decided to dissolve the UP assembly. The ministers came away with the feeling that Rao could be debating his own exit. For a change, Rao took a quick  decision: that he would stay on and fight his detractors rather than quit in disgrace. Though many demanded his resignation ("the only choice left to you is to go to the President of India and resign," a delegation of Muslim leaders had thundered at his face), Rao did not budge. Neither did he buy the argument that his resignation would redeem his besmirched honour or that a new leader, unburdened by the guilt of indecisions and betrayals, would soothe the wounded psyche of the country.

The limbs of government had become so atrophied by the mantra of consensus that quick action did not come even after the sacrilege. The forces led by Advani and  Ashok Singhal had the satisfaction of seeing that their entire plan of demolishing the structure and reinstalling the idols was carried out.

The big question was: what if the kar sevaks had stayed on? The government panicked. Rao did not want to shed blood even then. Everyone recalled how the Chinese army had to use tanks to clear the Tiananmen Square. Others talked of Operation Bluestar which left a deep scar on the Sikh psyche.


This once, God seemed to be on Rao's side. Happy that they had accomplished their mission beyond the wildest dreams of the VHP leadership, the kar sevaks were only too eager to oblige when ordered to clear out of the disputed site. The ease with which the Rapid Action Force took control of the site made many wonder whether the structure could not have been saved at the last minute, if the Centre had made up its mind.

But the job of handling the situation elsewhere in the country was not easy. Apart from the horror of widespread and blood-curdling acts of violence, the demolition of the Ayodhya structure once again brought out the communal poison which lurks in many Indian bosoms. There were the inevitable allegations of partisanship and inaction against the civil and police administration. Around the country magistrates and cops were taunted: "If your Centre itself does not act, how can we expect you to act?"

Rao is garnering support from all secular forces so that he can act firmly now on. For starters, the Congress is joining the opposition parties to form a secular front. "But how can we join you if you do not have a concrete plan of action?" asked a furious Mulayam Singh Yadav, who wanted no truck with a Congress headed by Rao. But the Congress solidarity and left's tactical shift gave Rao the much-needed manoeuvring space.

For Rao, picking up the pieces of his Ayodhya policy was not an easy one. From a man of peace who wanted to bring BJP round to reason he is trying to turn into an avenging torchbearer of secularism. Suddenly the rhetoric of Tirupati was back on his lips—in April he had demanded a secular face for political parties if they wanted to remain in the national mainstream. He ordered the arrests of Advani, M.M. Joshi, Ashok Singhal, Uma Bharati, Vinay Katiyar and V.H. Dalmia for their alleged role in inciting the kar sevaks to destroy the mosque.

Yet something seemed to be amiss. Rao's crackdown did not have the ring of ruthlessness. Advani's media managers made his arrest and subsequent movements into a media show. So too was the case with Joshi. Ram bhakts and journalists were always at hand whenever and wherever the duo appeared; obviously the BJP has its moles where it matters.

The BJP became belligerent once again following the arrests and the banning of the RSS, the VHP and the Bajrang Dal. The three remaining BJP state governments, all manned by RSS activists, are in a defiant mood and are daring Rao to dismiss them too. The Allahabad High Court judgment on December 11, invalidating the Kalyan Singh government's takeover of the 2.77 acres, presented yet another tangle for Rao to tackle before he proceeds to redeem his promise of reconstructing the mosque. The BJP is thirsting for an immediate election to cash in on votes from Hindus who supported the demolition. The party believes that it could make life so difficult for Rao—or any successor—that election becomes inevitable in the next few months.

Precisely what the Congress and the leftists are trying to avert by joining hands. They want to ensure that the emotions on the Ayodhya issue subside, because the BJP could otherwise come up trumps with the Hindutva card. A broad-based secular front could be Rao' own trump, but it all depends on whether he will take all the seven steps to a decision or leave the last one to God!