On a day of deadly air pollution, ministers suggested carrots, music and yagyas. 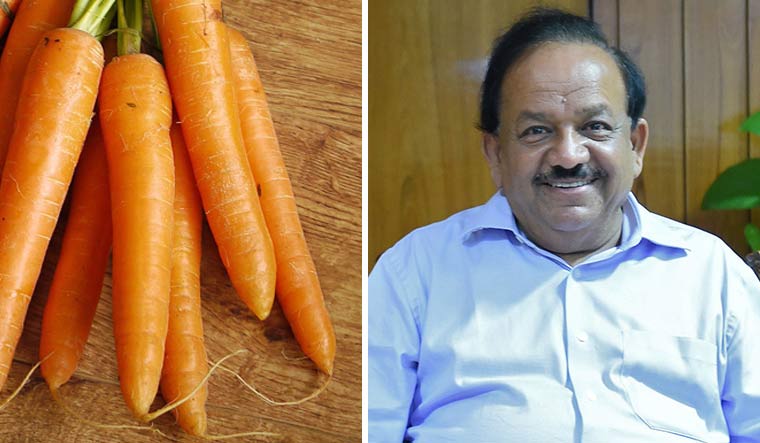 On a day when the capital city woke to some of the highest levels of air pollution possible, prompting schools to shut and residents to wear masks en masse, the Union Minister for Health Harsh Vardhan suggested eating carrots to help against "pollution-related harm to health."

Vardhan tweeted in the morning, "#EatRightIndia_34 Eating carrots helps the body get Vitamin A, potassium, & antioxidants which protect against night blindness common in India. Carrots also help against other pollution-related harm to health."

His tweet quickly earned the scorn of netizens, who were quick to make fun of the minister.

Vardhan's was not the only tweet that was ill-timed with the climate in Delhi. The Minister of Forest, Environment and Climate Change, Prakash Javadekar, had tweeted in the morning suggesting people start their day with some music.

Javadekar's post came a day after a spat he had with Delhi Chief Minister Arvind Kejriwal, who he accused of 'politicising' pollution.

The Energy and Resources Institute (TERI) released a brief statement and graphic on Sunday evening attributing the bulk of Delhi's deadly air pollution to stubble burning in nearby states. Punjab Chief Minister Amarinder Singh also announced that his government had fined nearly 3,000 farmers for stubble-burning.

Air pollutant levels in Delhi have increased alarmingly in the last few days. Agri burning activities in nearby states, apart from adverse meteorological conditions have led to a spike in #airpollution levels: TERI pic.twitter.com/kGOjw6OqXe

The same day, a UP minister, Sunil Bharala, suggested at a rally that it was wrong to criticise farmers for stubble burning, as they have always done so, and that people should perform a 'yagna' to Lord Indra (god of rain and the heavens) to get better air quality instead.

With little hope to improve the situation besides humour, citizens took to reacting to these minister's posts instead.

Today, 3 BJP ministers have come up with innovative solutions to smog in Delhi.

Mam I think Mr. Jaavdekar was HRD minister earlier. He is in fact suggesting the solution and asking us to listen music and become musician like Baiju Bawra. Play raag Megh and rain will come which will clear the air pollution. Am I right sir @PrakashJavdekar ? pic.twitter.com/DKzld24avx