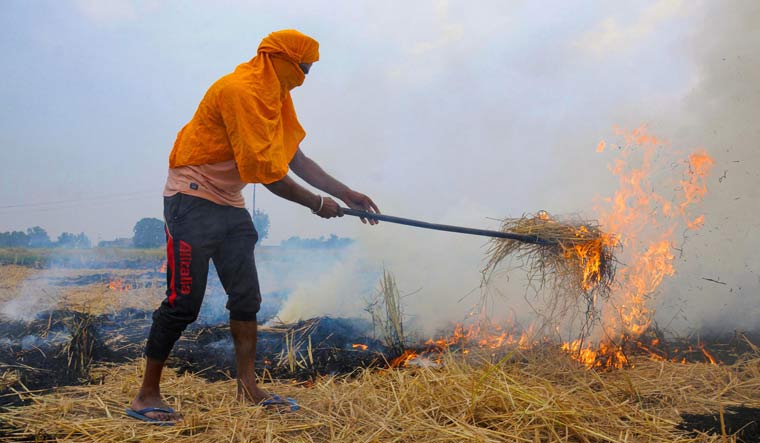 A farmer burns paddy stubble in a village on the outskirts of Amritsar, Punjab | PTI

Amid the people in national capital chocking on toxic air, the Punjab government has acted against nearly 3,000 of its farmers for burning stubble, Punjab Chief Minister Amarinder Singh on Sunday, while accusing his Delhi counterpart Arvind Kejriwal of doing little beyond "playing" politics to address the problem.

"Instead of addressing the problem, Delhi Chief Minister Arvind Kejriwal is playing political games," said Singh, asking what the AAP leader has done on the ground to resolve the issue.

The Punjab chief minister said the state authorities have initiated action against a total of 2,923 farmers in 20,729 cases of stubble burning reported till November 1.

Punjab government expects about 10 to 20 per cent decline in the number of such cases this year as against 2018 as a result of the intensified drive by it, he added.

While admitting that Punjab was also contributing to the Delhi smog due to the westerly upper winds, including those coming from Pakistan, the chief minister said putting the blame entirely on his state would be absolutely incorrect.

"Statistics show the parameters on the factors relating to the pollution were higher in Delhi," said Singh, while accusing Kejriwal of doing little beyond playing politics.

Punjab Chief Minister Singh on Saturday had termed all anti-farmer actions being taken by his government for stubble burning as being "against my conscience".

Elaborating on actions against farmers, Singh on Sunday said against a total of around 49,000 cases of stubble burning last year, this year the state government has so far received reports of 20,729 cases, with more than 70 per cent of the paddy crop already having been harvested, he said.

"Despite the Punjab and Haryana High Court having stayed the recovery of fine from farmers penalized last year, the state government has intensified its drive against the dangerous practice of stubble burning," Singh said in a statement here.

He expressed the hope that Prime Minister Narendra Modi will understand and respond positively to his letter on the grave issue of the worsening Delhi air pollution.

Singh on Saturday had proposed a "stubble management bonus" of Rs 100 for a quintal of farming produce by the Centre, while seeking its intervention to chalk out an inter-state strategy to curb the menace of air pollution.

Singh on Sunday reiterated that his government was fully seized of the problem and was working with commitment to put a stop to the stubble burning.

The enforcement teams has visited 11,286 fire incidents sites till November 1, 2019 and environment compensation amounting to Rs 41.62 lakh has been imposed in 1,585 cases with FIRs registered in 202 cases against defaulting farmers.

These steps were not, however, sufficient to check the problem, as most of the farmers in Punjab have less than 5 acres of land, making it economically unviable for them to go for hi-end ways of managing stubble, he said.

While staying the recovery of penalty imposed last year, even the high court had taken note of the growing indebtedness of the marginal farmers and the serious issue of farmer suicides" and chose not to heap any further financial woes on farmers, said Singh.

The compensation by the Central government is the only solution in the circumstances, said the chief minister, adding the matter was not one of politics, but a question of the future of our people, which goes beyond politics.

The ball was totally in the Centre's court since most of the state governments were bankrupt with his own state reeling under a massive debt, said Amarinder Singh, adding that the fiscal situation was linked to GST, which had aggravated their economic problems.

The chief minister said the situation has aggravated in recent years as production of paddy has increased, with the last two years reporting record production in Punjab, even though the state's people were traditionally not rice-eaters.

Pointing out that even Punjab cities have been enveloped by smog, Amarinder Singh underlined the need to change the cropping pattern by weaning farmers away from the paddy production and reiterated his demand for Minimum Support Price for other crops to help promote diversification.

The Union government has to step in and find a consensus to resolve the crisis, he stressed.

Notably, the chief ministers of Delhi and Haryana too on Saturday called for an urgent intervention by the Centre to develop and implement a joint action plan for a "permanent" solution to the problem.

The AAP government in Delhi has been blaming BJP-ruled Haryana and the Congress-ruled Punjab for failing to check stubble burning which is considered one of the main contributors to air pollution in the Delhi-NCR region.

With farmers continuing to defy the ban on stubble burning, a blanket of haze has engulfed Punjab and Haryana with several districts reporting air quality index in "severe" and "very poor" categories during the past few days.

Visibility too has reduced substantially in the most parts of the two agrarian states.

Chandigarh, the common capital of Punjab and Haryana, is also witnessing haze during the past few days.