Naga accord: Setback for NSCN(IM) ahead of talks as Centre, NNPGs agree on initial pact 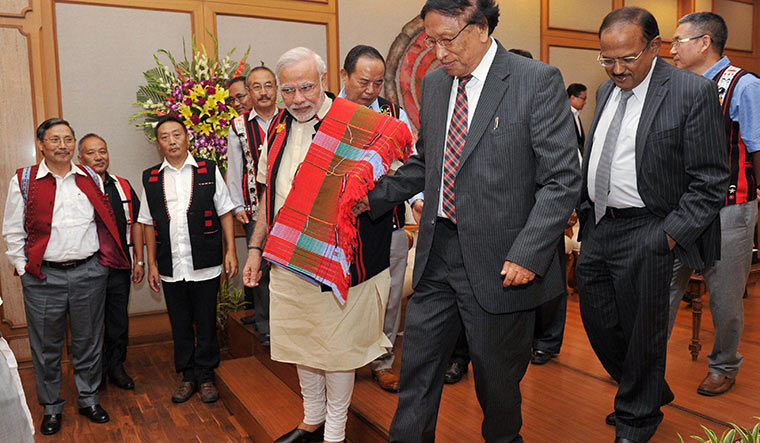 At a time when the dialogue between the Centre and the biggest Naga insurgent outfit, NSCN(IM), has failed to thrash out differences over dual demands of separate Naga flag and constitution, the Naga National Political Groups (NNPGs) have, for the first time, spelt out an agreed position "between the government and the working committee of NNPGs on the twin contentious issues".

On Monday, NSCN(IM) general secretary T.H. Muivah has been once again scheduled to meet Nagaland governor and interlocutor R.N. Ravi where discussions on the two main demands of separate flag and constitution are expected to be held.

With the NSCN(IM) unrelenting so far, the initial agreement of the NNPGs and the government has come as yet another jolt for the former whose 17 members switched over to the NNPGs last week. The NNPGs are a group of seven Naga organisations playing a crucial role to bring unity in the Naga peace talks.

The NNPGs said that the perception of national constitution (Yehzabo) was allegedly being forfeited by them was far from truth. They explained that “since the emergence of the semblance of local governance as thriving miniature republics in all Naga villages, independently or co- independently, the Nagas have, by and large, practiced conventions based on hereditary, customary and traditional ethos". It said that even the modern courts of post British-India era, including the state or regional high courts and the Supreme Court of India, usually refer back to the customary local courts for final adjudication of cases involving Naga traditional and customary conflicts.

“To brand the NNPGs as having forfeited the demand for flag and constitution is bereft of truth,” said the working committee of NNPGs in a statement issued on Monday. They said that “mis-elucidation from many unsolicited sources on these issues has brought doubts and uncertainties in the minds of the Naga people”, which they are attempting to clear once and for all so that there is no “perplexity and apprehension”.

The NNPGs said they are explaining the agreed position in laymen terms for the common Naga people to understand. On the issue of a separate flag, it said that “whether God given covenant or a man-made emblem, the rainbow flag embossed below with David’s star has been in sacred utility since the dawn of the Naga struggle and no group or entity intend to emasculate the same, either before or post solution ".

“It rather be the democratic and popularly elected Tatar and Leacy Ho Ho, as elected and empowered by the Naga people, to legitimate and legitimise its usage in whatever manner as may deem fit post solution," it said. “Therefore, the illegitimate comprehension may be put to rest in the context of the flag.”

While explaining the agreed positions, the working committee of the NNPGs said that it would be premature to depreciate this “agreed position” between the government and NNPGs “on mere scepticism when even the door for sovereignty and integration has not been sealed or culminated beyond redemption, but to be pursued through peaceful and democratic processes”.

This move of the NNPGs is being viewed as the first positive outcome of the peace talks for the Nagaland governor and interlocutor R.N. Ravi who has been under pressure to ink the deal with the Naga groups by month-end.

The central government has been keen for a final peace settlement by October 31. The deadline has also built pressure on the Naga groups and, with rumours about the details of the peace talks, the atmosphere has become tense in Nagaland, prompting additional security forces to be deployed on the ground over the past 10 days.

Besides meeting the deadline, Ravi also has the responsibility that the crucial ceasefire pact with the NSCN(IM) is not broken under any circumstances as any break in ceasefire may not only jeopardise the peace process, but also bring law and order and security problems for the government in the northeast. The home ministry led by Amit Shah already has its hands full with the bifurcation of Jammu and Kashmir coming into effect on October 31.