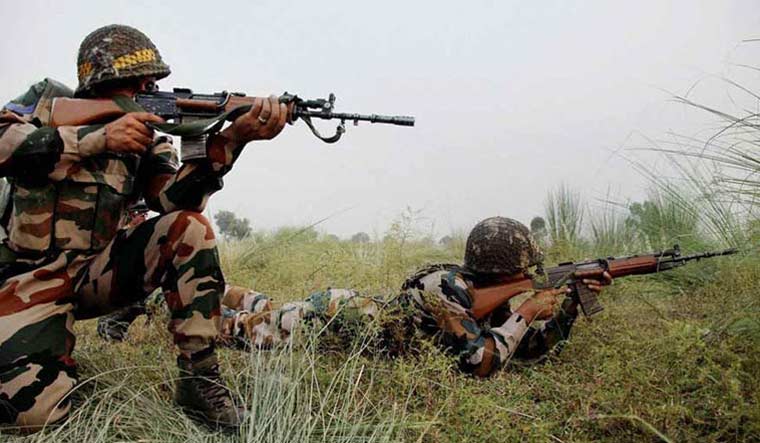 Five Pakistani soldiers were killed after the Indian Army resorted to heavy artillery fire on Sunday, targeting terrorists launch pads along the Line of Control (LoC) in Jammu and Kashmir in retaliation to the ceasefire violation on Saturday, according to Army sources.

There have been reports of killing of at least four-five terrorists in the shelling by the Indian Army, which inflicted significant damage on the Pakistani side.

Two India Army personnel also lost their lives in the firing in Tangdhar sector, Kupwara district along the LoC.

Pakistan had initiated unprovoked ceasefire violation in the Tangdhar sector in an attempt to push militants into Jammu and Kashmir from their side. The Pakistan Army targeted civilian areas, killing one and injuring three others.

"As a result calibrated escalation of area weapons was undertaken by the Indian side in which terrorist launch pads and several Pakistan Army posts giving incidental protection to these launch pads and certain gun positions were hit," the official said.

India has escalated its attack beyond the Tangdhar sector, targeting terrorists launch pads, Pakistan Army posts along the border. Sources in the Army said that the Indian Army retains the right to respond at a time and place of its choosing in case Pak Army continues to assist terror activities across the borders.

Defence Minister Rajnath Singh spoke to Army Chief General Bipin Rawat over the situation in the Tangdhar sector. The defence minister is personally monitoring the situation and has asked the Army Chief to keep updating him.

Pakistan has violated the ceasefire over 2,000 times along the LoC until September this year, killing and injuring scores of civilians and army men.

Meanwhile, Pakistan army said on Sunday that at least nine Indian soldiers were killed and several injured in the fierce exchange of fire across the Line of Control, but Indian Army sources rejected its claim.

In Pakistan-occupied Kashmir (PoK), Muzaffarabad Deputy Commissioner Badar Munir told media that the areas in Nauseri sector of district Muzaffarabad and its adjoining Jura sector of Neelum Valley were the worst hit.