The two leaders held discussion during their dinner at shore temple 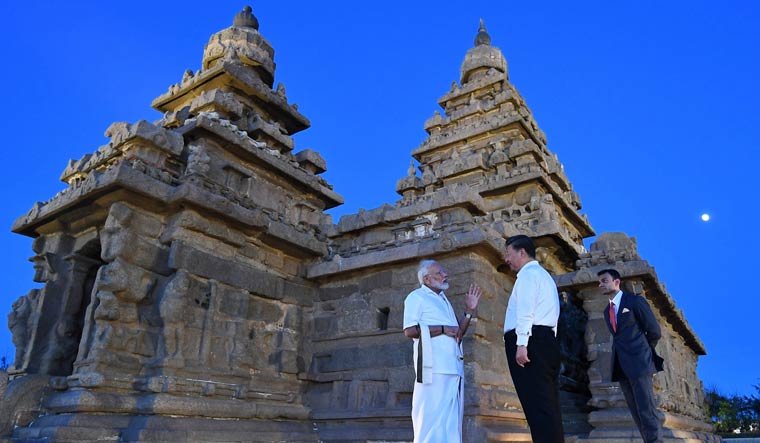 Prime Minister Narendra Modi was all out to promote Tamil culture and heritage as he welcomed Chinese President Xi Jinping at Mamallapuram on Friday evening. Modi gifted a Nachiyar Koil branched Annam lamp and a Thanjavur 'Dancing Saraswathi' painting to the Chinese leader.

Nachiyar Koil lamp is one of the traditional lamps created and crafted by the Tamil Nadu handicrafts department. These lamps are unmatched for its artistic craft and are considered most auspicious. Thanjavur paintings are believed to bring prosperity to home and are preserved as antiques. The 'Dancing Saraswathi' is considered the most popular among all those paintings.

During the music and dance concert, Modi and Xi enjoyed several aspects of Bharatanatyam with songs like Alarippu, Purappadu, Sethubandhanam, Bhajo Re Bhaiyya Govinda Hari, Thillana and Shnathi Nilava Vendum.

After the cultural event, the two leaders sat for dinner at the shore temple by the Bay of Bengal. Except for the interpreters of the two leaders, none of the delegates was present at the private dinner hosted by Modi. The prime minister held a 110-minute long discussion with the Chinese leader during the dinner.

At ITC Grand Chola, where Xi is staying, the Chinese leader's favourite meal has been prepared with onions and meat. The lunch menu for the Chinese delegates includes fried liver made with carrot, cabbage, noodles, varieties of lentils and soups. The menu also includes South Indian food varieties like rice, 'sambhar', 'vatha kuzhambu', 'rasam', 'briyani', 'chappathi', 'roti' etc. The breakfast on Saturday is likely to include Tamil food varieties like 'idli', 'dosa', 'vada', 'ven pongal' and 'idiyappam'. A special Chinese chef and a team have been brought to Chennai to prepare special food for Xi.