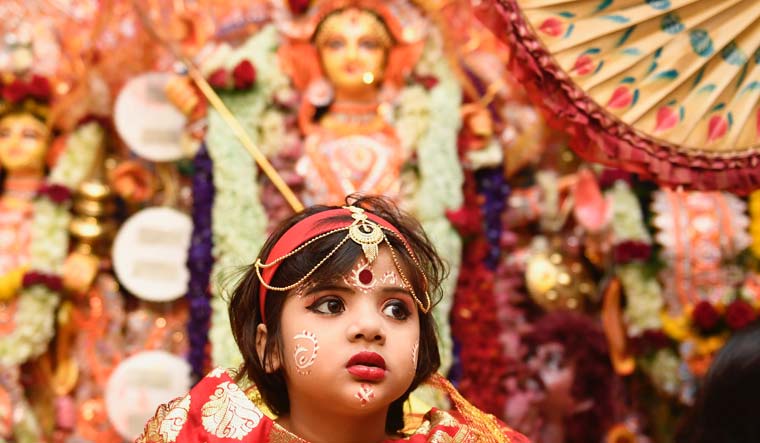 A four-year old Muslim girl from Agra, Fatima, is being worshipped as Kumari on Mahaashtami, the second day of the four-day puja, at a household in Kolkata | Salil Bera

A family in West Bengal has worshipped a four-year-old Muslim girl during the Kumari Puja ritual of the ongoing Durga Puja festival.

The Dutta family of Arjunpur in Kolkata's North 24 Parganas district has worshipped Fatima, who hails from Agra in Uttar Pradesh, on the occasion of 'Maha Ashtami' on Sunday.

Pre-puberty girls are worshipped as Goddess Durga in the ritual which is an integral part of 'Maha Ashtami'. According to the tradition, only Brahmin girls can be worshipped as Kumari.

Muslim girl worshipped by Hindus in Bengal during Kumari Puja

The Dutta family have been holding Durga Puja in their residence since 2013, but this year they decided to move away from tradition to send a message of "inclusiveness and communal harmony".

"Earlier we used to worship only Brahmin girls as Kumari. But Maa Durga is the mother of every human being on the earth. So we broke away from the tradition," said Tamal Dutta, a family member who is an engineer at the local municipality.

Once it was decided to worship a Muslim girl, the Duttas faced an uphill task of finding one.

He had asked his colleague Mohammed Ibrahim for help. Ibrahim suggested his niece Fatima, who lives in Agra with her parents, and convinced his sister and brother-in-law for their permission.

Fatima, who is yet to start her schooling, and her mother have been staying with the Duttas for the ceremony.

Worshipping of a Muslim girl during Kumari puja is, however, not new. Swami Vivekananda had worshipped a four-year-old Kashmiri Muslim girl as Goddess Durga on August 18, 1898 during Kumari Puja ritual at the Kheer Bhawani temple.

In 1901 he introduced Kumari Puja at Belur Math, the global headquarters of Ramakrishna Mission established by him, to underline the importance of women in society.