What action has govtt taken against illegal constructions, the SC asked 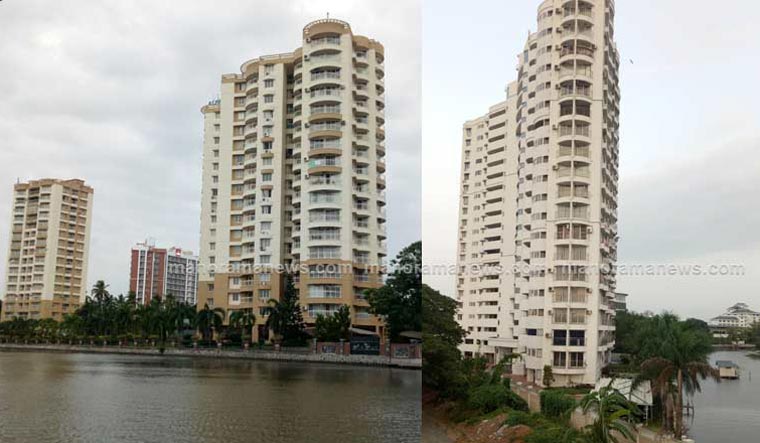 The Supreme Court has once again criticised the Kerala government for not demolishing the four illegal apartment complexes in Maradu municipality in Ernakulam district.

Hearing the matter on Monday, Justice Arun Mishra, who is heading the bench, orally criticised the Kerala government for its inaction. “We are really shocked. What action has the government taken against illegal constructions? If some disaster happens in the coastal zone, the families residing in the buildings will be the first ones to get affected. Your officers should be held responsible?” Justice Mishra asked, reported Live Law.

The court will pass a detailed order on Friday.

The Supreme Court had rapped the government on September 6 after it noted that Kerala state government had not complied with its previous demolition order, which was issued in May this year. The court then issued an ultimatum to the government that structures built in Maradu—which lies on the banks of Vembanadu lake—violating Coastal Regulation Zone rules, should be demolished latest by September 20. The flats to be demolished—the 16-storey Alpha Serene and twin towers of the 18-storey Holy Faith H2O—stand tall on either side of the Kundannoor river. Golden Kayaloram, the 16-storey structure in Kannadikkadavu, faces the Champakkara canal. Jains Coral Cove in Kettezhuthin Kadavu, another 16-floor structure, lies close to the Nittoor Canal.

It has been reported that the court rejected state government's plea to get three more months to demolish the illegal flats.

The bench asked Kerala Chief Secretary Tom Jose, who appeared before the court on Monday, how much time his government needs to demolish the structures. When the chief secretary sought three months, Arun Mishra replied in the negative.

The court orally directed the Kerala government to conduct a survey to estimate the number of illegal construction along the Kerala coast. It further warned that the chief secretary will be held responsible for all violations under the Coastal Regulation Zone Act.

Reacting to the court's observation that 'residents in four flats will be first ones to get affected if some disaster happens in the coastal belt,' residents in the demolition-threatened apartments said they are happy that Supreme Court is concerned about their lives. “But what about our livelihood? What would we do if we lose our property? Why is the court silent about our right to live?” asked Shamsudheen Karunagappally, a member of the Maradu Bhavana Samrakshana Samiti (committee to protect Maradu homes). He said the court was misinformed about the facts.

“The lake near the flats has never been in spate.” Beyoj Chennat, another resident, pointed out. "During the 2018 floods, we had given shelter to over 30 families from Thripunithura and Edappally," he said.

Other flat owners said they would react after getting the court order. Residents of H2O Holy Faith, who had been in the forefront of the agitations against the court order, chose to stay away from media glare on Monday.