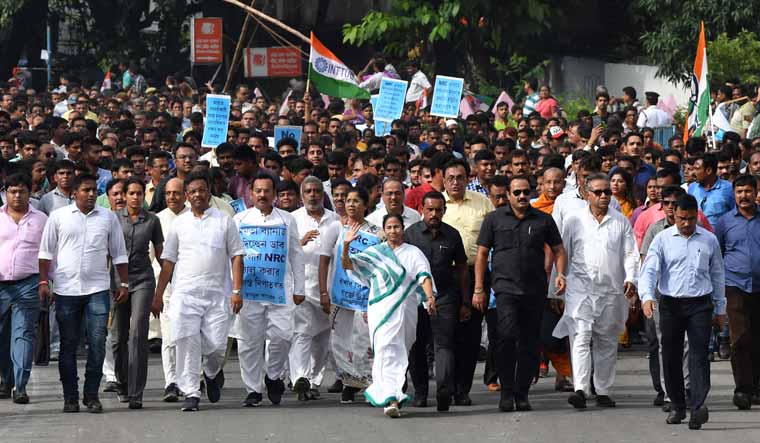 West Bengal Chief Minister Mamata Banerjee on Thursday warned the BJP not to play with fire in the name of NRC and said she would never allow the exercise in the state.

Banerjee, also the Trinamool Congress supremo, challenged BJP leaders to touch even one citizen of West Bengal in the name of the National Register of Citizens (NRC).

"We will never allow NRC in Bengal. We will not allow them to divide the people on religious and caste lines. We will not accept the NRC in Assam. They have silenced the people of Assam by using the police and the administration but they cannot silence Bengal," she said while addressing an anti-NRC rally in Kolkata. 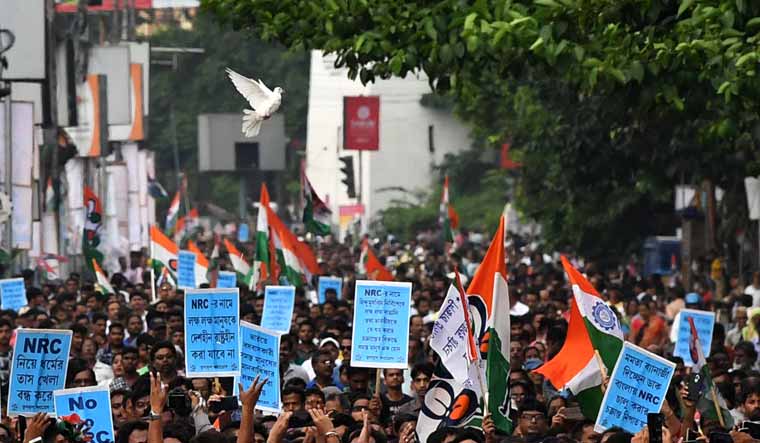 A dove flies above the rally members, as they walked from Sinthi to Shyambazar | Salil Bera

The NRC seems to be the latest flashpoint between the TMC and the BJP in West Bengal, with the ruling party opposing it and the saffron party advocating it to throw out infiltrators.

Banerjee, who has been one of the most vociferous critics of the NRC in Assam, said, "Over 19 lakh people are left out in the final list of NRC in Assam which includes Hindus, Muslims and Buddhists. What more proof of identity do you need even after 70 years of Independence? Why do we need to give them our proof of identity?"

During the Lok Sabha campaigning, BJP president Amit Shah had said his party will replicate the NRC exercise in West Bengal on coming to power at the Centre to "throw out" infiltrators but Hindu refugees will not be touched.

BJP West Bengal president Dilip Ghosh recently said if the NRC is conducted in the state, over two crore Bangladeshi infiltrators in will be identified.

"The BJP is saying they would throw out two crore Bangladeshi infiltrators. I challenge them to touch even two people. If they play with fire, they would get a befitting reply. We have been living harmoniously for decades. The BJP can't divide us," she said at the rally.

The TMC chief led the protest march from Sinthee to Shyambazar five-point crossing, five kilometres away, in North Kolkata to protest against the NRC in Assam.

The rally was organised days after the TMC along with Congress and Left Front passed a resolution in West Bengal Assembly opposing the NRC.

The party had also taken out rallies in other parts of the state to oppose the exercise to update citizenship register on September 7 and 8.

Over 19 lakh of the 3.29 crore applicants in Assam did not find a place in the final NRC, which was published on August 31.

Speaking on the condition of the economy in the country, Banerjee said the GDP growth is the lowest in several years and the economy is getting weaker than the neighbouring nations.

She also criticised the decision of merger of banks by the BJP-led government at the Centre.