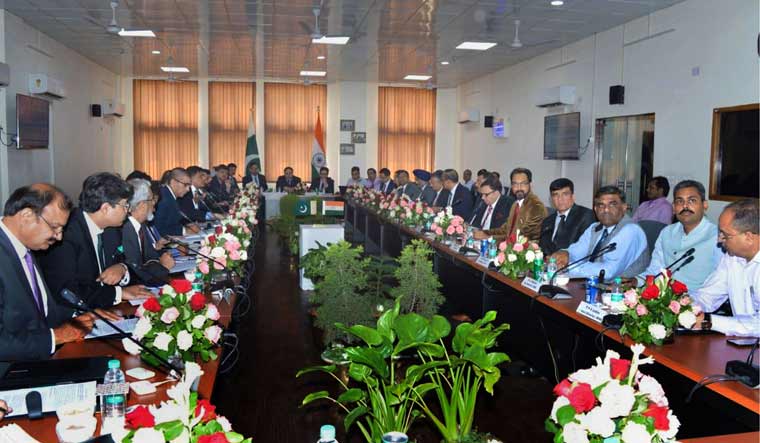 File photo of the Indian and Pakistani delegations during the third round of talks on 'Kartarpur Sahib Corridor', at Attari Wagha border, Wednesday, Sept 4, 2019 | PTI

In what could be a set back for Kulbhushan Jadhav, Pakistan has ruled out giving any further consular access. The Pakistan foreign ministry spokesperson, Mohammad Faisal, on Thursday stated that there would be no other meeting for Jadhav who is lodged in Pakistani jail under espionage charges.

India, however, is not giving up just as yet.

Responding to Pakistan’s announcement, Raveesh Kumar, the ministry of external affairs spokesperson said, “We will try that we push for the full implementation [of the ICJ order]. We would like to remain in touch with Pakistan authorities through diplomatic channels.”

India may have won the battle in the International Court of Justice to get consular access, but Pakistan is determined to win the war.

The tensions between the two countries have now spilled on to the only project that both sides are committed to—the Kartarpur corridor. With the deadline to open the Kartarpur Corridor looming large, this “bridge of peace’’ (as Prime Minister Narendra Modi once referred to it), has now become the latest battleground.

The third meeting between the two sides, which was held on September 4 to “discuss the modalities and finalise the modalities’’ for the facilitation of pilgrims, ended in disagreement.

“We had hoped all pending issues would be resolved but we realised that Pakistan was being very inflexible,’’ said Kumar. Citing three instances where they could have shown some flexibility, he said, “The first was Pakistan’s insistence on charging $20 per pilgrim to visit Kartarpur Sahib… They didn’t agree to the number [of pilgrims]—we had asked for 10,000 to visit Kartarpur Sahib on special occasion… We asked them to show flexibility on this. Third was a presence of a consular officer, a protocol officer to accompany the delegation everyday. On these three counts, we didn’t get a favourable response.’’

Kumar, however, emphasized India’s commitment to the project and said that India was on schedule to complete the work. Urging Pakistan to “show flexibility,’’ he said “It is a long-pending demand.’’