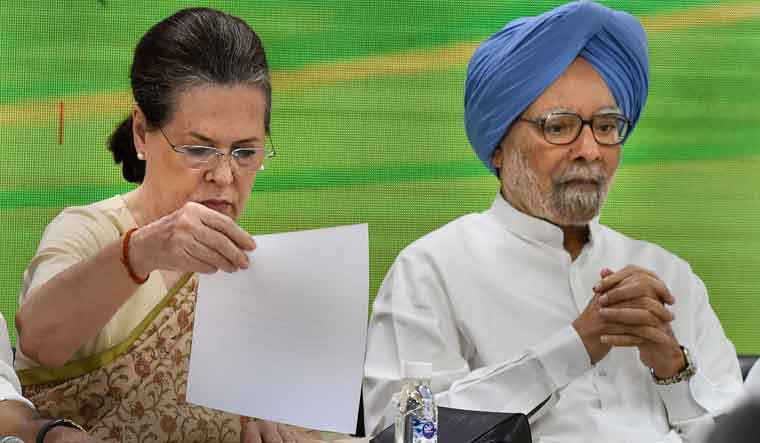 After the serious setback it received in the Lok Sabha elections, the Congress has decided to scale up its mass contact programme, which includes a house-to-house membership drive and appointing 'motivators' at the district level to train workers and reach out to the people at the grassroots level.

The decisions were taken at a meeting called by Congress President Sonia Gandhi of the party's general secretaries, in-charges of states, PCC chiefs and CLP leaders in Delhi on Thursday. It was also decided that the party, in an effort to corner the Narendra Modi government, will organise a countrywide agitation on the issue of economic slowdown. It will also hold 'padayatras' in all the states to commemorate the 150th birth anniversary of Mahatma Gandhi on October 2.

The meeting, Sonia's first with Congress leaders from all the states after she took charge as interim party chief, decided that the party will in October launch a nationwide membership campaign, which will run on the digital platform and will also be carried out using the traditional paper-based option. An app will be launched to carry out the drive through digital means. The party has more than two crore members at present.

“Each and every leader of the party will participate in the house-to-house campaign for membership in their respective booths,” said K.C. Venugopal, AICC General Secretary in-charge of Organisation.

The Congress has also decided on adopting a more contemporary and robust method to train its workers as also to reach out to the people at the grassroots level. It was decided that the training module will emphasise on communicating with the youth to educate them about “true nationalism and secularism”. The training activities will see 'motivators' being appointed at the district level to train workers and also reach out to the people.

According to sources, the proposal was to name these 'motivators' as 'preraks'. However, the idea of calling them 'preraks' was dropped since it was felt that the term was very similar to RSS's 'pracharaks'. The training programme will now be a year-long affair instead of an activity to be undertaken only at the time of elections.

The principal opposition party has decided to hit the streets on the issue of economic slowdown, having decided to hold a massive agitation across the country from October 15 to 25. A state-level Pradesh Congress Committee delegates convention on the issue of the economic crisis will be held from September 28 to 30.

The party will hold largescale 'padayatras' on October 2 to mark the 150th birth anniversary of Mahatma Gandhi. The state units of the party have been asked to organise programmes down to the district and block levels.

At the start of the meeting, Sonia spoke about the “grave economic situation” and the problem of unemployment. She said the investors' confidence was shaken and the government was more and more clueless and insensitive.

In the backdrop of the arrest of former union minister P. Chidambaram and cases against other Congress leaders, Sonia said “vendetta politics” was at its peak and those who were speaking against the establishment were being threatened and intimidated. “We must stand up fearlessly to fight on the streets, fight in villages, towns and cities. We must have a concrete agitational agenda on issues of pressing concern to the people—whether they be economic or social. It is not enough to be active and aggressive on the social media even though that too, is needed and we need to do that better. Far more important is to go to the people directly,” Sonia said at the meeting.

Referring to the trend of leaders leaving the Congress, she said, “Some of our party colleagues have left us in recent times. All I can say is that they have revealed their opportunistic character.”

Former Prime Minister Manmohan Singh spoke in detail about the “protracted slowdown in the Indian economy”. He said the economy was going from bad to worse and the government was not realising it.

He pointed out that the stock markets were showing an atmosphere of gloom. The responsibility of the Congress party, he said, was to tell people that the government was ignoring the promises it had made, and that the economic reality was very different from what was promised.