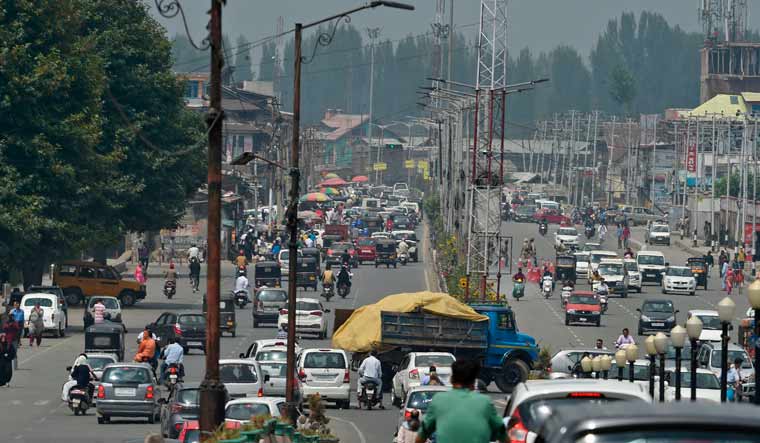 Residents drive along a busy road in Srinagar | AFP

Internet services in Jammu and Kashmir are unlikely to be restored anytime soon as Pakistan has launched a campaign against India and is also trying to instigate Naga insurgents with provocative videos against the government, officials said on Thursday.

The Jammu and Kashmir administration is gradually lifting restrictions on movement of people, landline phones, mobile phones network to ease life, which have been hampered since the abrogation of the special status given to the state under Article 370.

"As the situation is improving, the restrictions are being removed. However, Internet connection will not be restored soon as Pakistan continues to spread venom against India through the Internet. They are trying to instigate people against the government and such videos, which originated in Pakistan, have even reached Nagaland," a security official said.

Instant messaging app WhatsApp was widely used in Jammu and Kashmir in the past to feed misinformation against the government.

"Once the Internet is restored, Pakistan will try its best to instigate people in Jammu and Kashmir like what they are now doing with insurgents in Nagaland," the official said.

As per information received by the authorities, several provocative messages are doing the rounds in Nagaland.

Another official said Pakistan's agenda to create trouble in India through social media has been detected and it was found that Pakistani officers were shooting videos in Pakistan occupied Kashmir (PoK) showing security forces wearing uniforms of Indian security forces committing atrocities against people.

"Such videos are being circulated in various places," the official said.