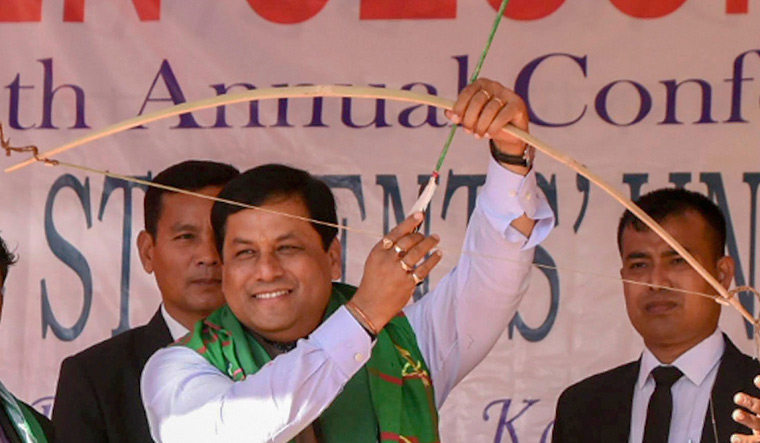 (File) Assam Chief Minister Sarbananda Sonowal being presented a bow and arrow during the 11th Annual Conference of All Santal Students' Union, at Kawaimari, in Sonitpur | PTI

Assam Chief Minister Sarbananda Sonowal on Thursday appealed to the people in the state to not panic if their names do not appear in the final National Register of Citizens (NRC) to be published on August 31.

He said the Union ministry of home affairs had already made clear the steps to be taken and procedures to be followed in case of exclusion of names from the final NRC.

Speaking to reporters on the sidelines of a meeting, Sonowal said the state government and the Centre were making every effort to ensure publication of an error-free NRC.

"We have been extending cooperation in the whole process with due respect to the Supreme Court," he said.

The apex court has been monitoring the NRC updation exercise since 2013.

Sonowal said he hoped that the people of the state will continue to extend cooperation after publication of the final NRC as they did when the draft was published.

He also appealed to the people to not panic in case their names are excluded from the final NRC.

Assam is the only state in the country where the NRC updation exercise is taking place. It was first held in 1951.

Another 1,02,462 names were added to the list of excluded persons in June this year, taking the number of ineligible persons to 41,10,169 in the complete draft.