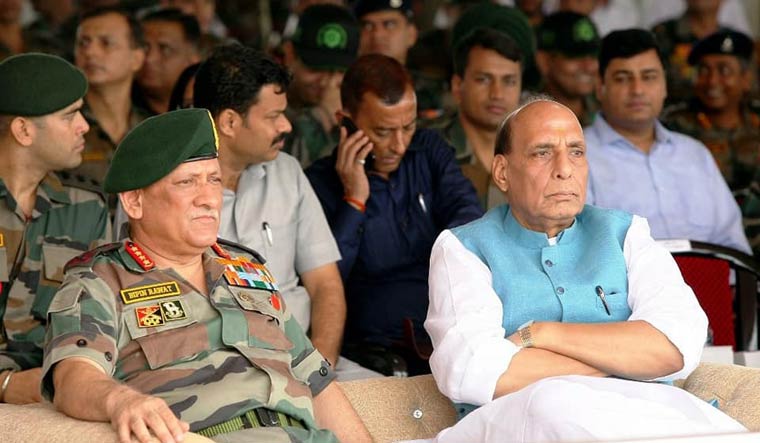 Initiating major transformation in the Indian Army, Defence Minister Rajnath Singh has approved certain decisions regarding re-organisation of the Army Headquarters (AHQ). Ministry of defence officials claim that these measures are part of four studies being undertaken by the Army for force restructuring and transformation.

According to a statement issued by the defence ministry, the measures approved include a separate vigilance cell under the Chief of Army Staff (COAS) with tri-services representation, an umbrella organisation under Vice Chief of Army Staff (VCOAS) for enhanced focus on human rights (HR) issues and relocation of 206 Army officers from AHQ to formations/units in the field.

Presently, the vigilance function for the Chief of Army Staff is through multiple agencies and there is no single-point interface.

“An independent vigilance cell will be made functional under COAS. Accordingly, ADG (Vigilance) will be placed directly under the COAS for this purpose. It will have three colonel-level officers (one each from Army, Navy and Air Force). This will be done within the existing posts at AHQ,” the ministry of defence statement said.

On the human rights organisation, the ministry said that to give high priority for human rights convention and values, it has been decided to set up a special human rights section headed by an ADG (major general-rank officer) directly under the VCOAS and will be the “nodal point to examine any HR violation reports”.

Further, to enhance transparency and ensure the best of investigative expertise is available to the section, a police officer of SSP/SP rank will be taken on deputation, the statement said.

The third measure will see a trimming down of the officer strength in the AHQ and 206 officers will be posted out to field formations and units. These officers will be three major generals, eight brigadiers, nine colonels and 186 lieutenant-colonels, the statement added.

With an aim to trim the size of the Army, Army Chief Bipin Rawat ordered four studies including restructuring of AHQ, force restructuring that includes creation of integrated battle groups (IBG), cadre review of officers and review of terms and conditions of junior commissioned officers (JCO) and other ranks (OR). The aim is holistic integration to enhance the operational and functional efficiency, optimise budget expenditure, facilitate force modernisation and address aspirations, the Army had said earlier.

On Independence Day, Prime Minister Narendra Modi has also announced the creation of a chief of defence staff, the senior-most military officer.