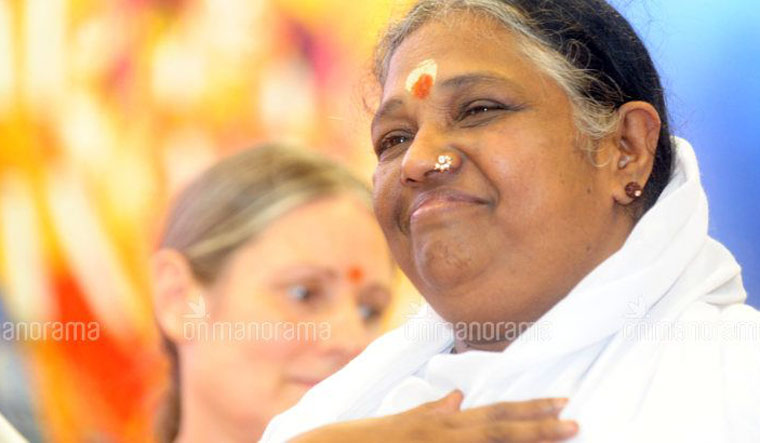 The Amritanandamayi Mutt announced on Friday that it would give Rs one lakh to families who have lost a member in the South West monsoon rains, which battered Kerala, claiming 111 lives since August 8.

"My heart goes out to those families who have lost their loved ones,"a press release quoting the spiritual leader said.

"I am praying to the Paramatma that they are able to get back their self-confidence and attain peace and prosperity. We all need to reach out to those in need with compassion and service.

It is only the love and compassion that flows from the heart that can help society in such times", she said.

Mata Amritandamayi also said that she feels the recent flooding in Kerala was due to indiscriminate chopping down of trees and other "abuses of nature."

The Mutt has also set up its "Amrita Helpline" at the Amritapuri campus of Amrita Vishwa Vidyapeetham, manned by volunteers from the math's youth group, Ayudh.

During the 2018 Kerala floods, these volunteers fielded more than 25,000 calls, connecting more than 100,000 flood victims across Kerala with appropriate relief services, including government officials, the Navy, NDRF, Kerala State Police, local fishermen and other volunteering agencies.

The Mutt is also encouraging people to reach out for help via its Amrita Kripa App that is available for free download on Google Play.

The ashram has also opened relief camps at various centres across the state and a relief mission is underway at Wayanad, Idukki and other districts, the release said.