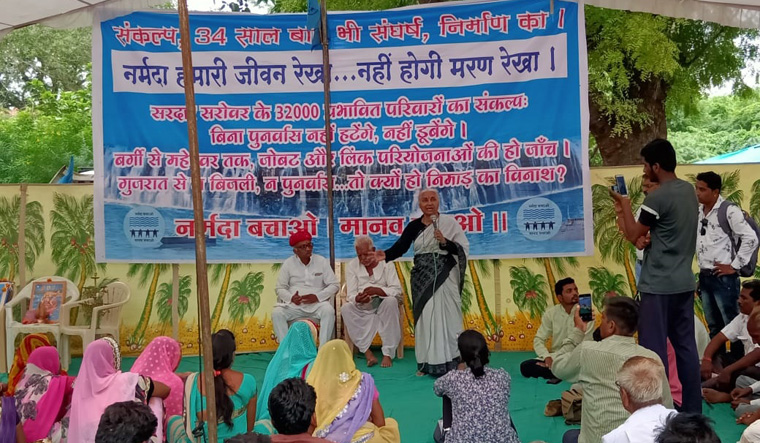 People affected by the Sardar Sarovar dam project on River Narmada started another round of indefinite agitation on Wednesday under the banner of Narmada Bachao Andolan (NBA), even as the Narmada water levels rose above the danger mark in Barwani district, submerging the Rajghat Bridge.

The people affected by the dam are demanding complete rehabilitation before submergence on the backdrop that this year, there is readiness on part of the Gujarat government to fill up the reservoir on Sardar Sarovar dam up to the maximum limit of 138.68 metres, which will mean submergence in a huge portion of the affected area.

The affected people, under the banner of NBA, have been demanding that all the disputes regarding rehabilitation should be resolved and complete rehabilitation ensured before the water is filled up to the maximum level.

The NBA has said that such action would be in violation of various orders of the Narmada Tribunal as well as the Supreme Court. About 32,000 families in MP, Gujarat and Maharashtra are affected by the project and have been challenging the process of submergence without complete rehabilitation.

Meanwhile on Wednesday, the water level in Narmada rose to 127.5 metres and the river was flowing 4 metres over the danger mark, submerging the Rajghat Bridge in the process.

NBA leader Medha Patkar, while talking to media persons, said that the agitation would continue till the gates of the Sardar Sarovar dam are not opened (so that water could flow out and submergence avoided). She said that government officials should camp at the agitation venue and attempt to resolve the issues of the people.

Also, the NBA has demanded that a high level committee should be constituted in consultation with the organisation to take an in-depth look into the benefits and losses of the Sardar Sarovar project, environmental and other issues related to it.

A NBA media note said that lakhs of people still reside in the 214km long purview of Sardar Sarovar and their rehabilitation status is still under question. The main demands of the affected people are land for land compensation and ensuring of livelihood options.

About 150 families are residing in Rajgarh and 2,000 persons in Nisarpur of Dhar district. The NBA has claimed that 182 villages and the township of Dharampuri are completely affected, but people have not received complete rehabilitation. They refuse to move out to tin shades set up in name of rehabilitation site as the amenities are totally lacking there.

The NBA has also been alleging large scale fraud in the rehabilitation process with genuinely affected people not receiving their dues.