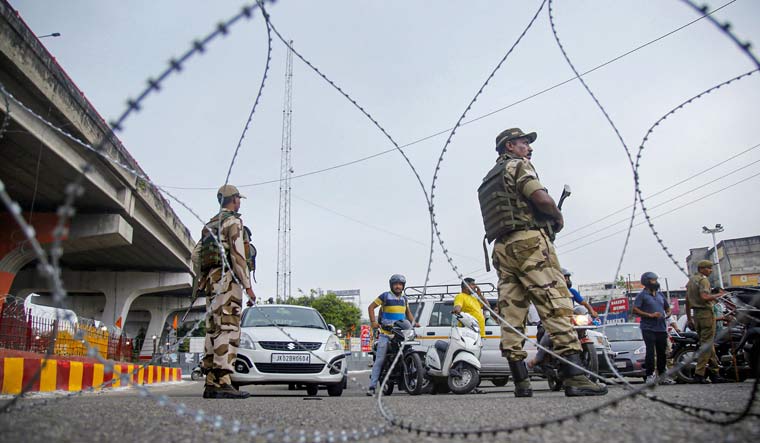 The government on Monday revoked Article 370 to take away Jammu and Kashmir's special status, and proposed the bifurcation of the state into two union territories, Jammu and Kashmir, and Ladakh, a bold and far-reaching decision that seeks to redraw the map and future of a region at the centre of a protracted militancy movement.

Fulfilling an electoral promise of the BJP less than 90 days after the Modi 2.0 government took power, Union Home Minister Amit Shah announced the decision in the Rajya Sabha, which approved both the resolution and the Jammu and Kashmir Reorganisation bill.

Both will now come up in the Lok Sabha on Tuesday.

The government's effort to tackle head-on the vexatious 72-year-old problem wracking the soul of the nation sent a wave of jubilation among BJP supporters and others, but provoked outrage from the NC and the PDP, the principal political parties in Jammu and Kashmir.

The chiefs of the two parties, NC's Omar Abdullah and PDP's Mehbooba Mufti, as well as People's Conference's leader Sajjad Lone were arrested in Srinagar on Monday evening, officials said.

Unprecedented in its political courage, the decision to take away the state's special status and treat it like any other is aimed at the ending the decades old separatist movement.

As Shah moved the resolution in the Rajya Sabha that Article 370 -- which allowed Jammu and Kashmir to have its own Constitution and prohibited outsiders from buying land and property in the state -- will no longer be applicable, there were also fears that the government's decisions would change the demographic profile.

Former Jammu and Kashmir chief minister Mehbooba articulated her apprehensions in a tweet.

"GOIs intention is clear &amp; sinister. They want to change demography of the only muslim majority state in India, disempower Muslims to the extent where they become second class citizens in their own state," she said.

According to the resolution moved by the Home minister, Article 370 ceases to be operative from Monday itself.

"The president on the recommendation of Parliament is pleased to declare as from 5th of August 2019, all clauses of the said Article 370 shall cease to be operative... ," the resolution stated.

As anxiety escalated with people in the Valley mostly incommunicado with no workable phones or Internet connections and questions galore on what changes this would bring in a region that evokes emotive responses nationwide, Shah said in the House that "nothing will happen".

He said full statehood will be restored to Jammu and Kashmir at "appropriate time" and after "normalcy" returns.

The government will not allow the situation to turn into another battle torn Kosovo, he said.

"It was heaven on earth and will remain so," he said replying to the debate on the resolution and the bill which were taken up together.

The Article 370 announcement, capping days of uncertainty in Jammu and Kashmir, led to an uproar, in the House and outside it too.

India has failed Kashmir in keeping its promises, said Mehbooba, saying the government's unilateral decision "to scrap Article 370" is illegal and unconstitutional.

"Government of India (GOI)'s unilateral and shocking decisions today are a total betrayal of the trust that the people of Jammu &amp; Kashmir had reposed in India when the state acceded to it in 1947. The decisions will have far-reaching and dangerous consequences. This is an aggression against people of the State...," he said.

Congress leaders added their voices with P Chidambaram agreeing with Mehbooba in calling it a "catastrophic step".

"We anticipated a misadventure, but did not think in our wildest dreams that they will take such a catastrophic step."

"Today is a black day in the constitutional history of India," he added.

Left leaders also expressed their opposition. While CPI general secretary D Raja said the "regressive step will further alienate the people of J-K", CPI(M) termed it an "attack" on the Constitution.

However, the mood was triumphant in the BJP quarters.

Everything had fallen into place for the party that has 300-plus seats in the Lok Sabha and managed the arithmetic efficiently in the Rajya Sabha too.

BJP leaders hailed the move and were buoyed by support from some regional parties like BSP, BJD, TRS and AIADMK, which extended full support to the resolution and the bill. NDA constituent JD(U) walked out.

The government got support from Delhi Chief Minister and AAP convenor Arvind Kejriwal, who said he hoped it would bring "peace and development" in the state.

"What a glorious day. Finally the martyrdom of thousands starting with Dr Shyam Prasad Mukherjee for complete integration of J&amp;K into Indian Union is being honoured and the seven decade old demand of the entire nation being realised in front of our eyes; in our lifetime...," he tweeted.

Celebrations broke out the Shiv Sena headquarters in Mumbai's Dadar area. Yuva Sena chief Aaditya Thackeray dubbing it as a "moment of pride" and a "historic day" for the country.