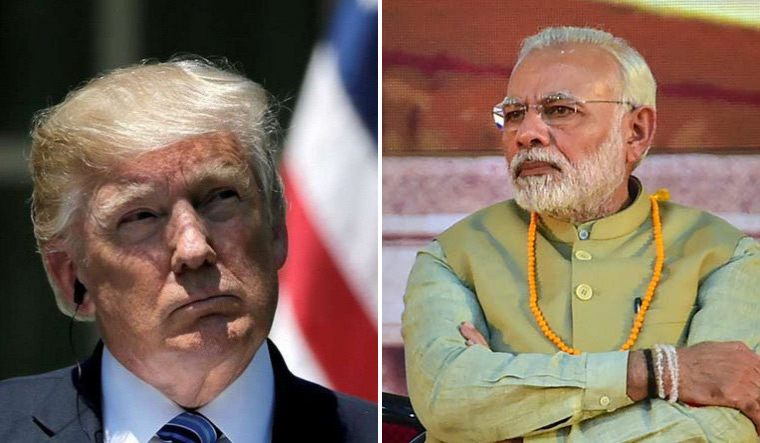 The Congress on Tuesday welcomed the government's reiteration of India's 'no third party involvement' stand on the Kashmir issue, but asked why Prime Minister Narendra Modi was "mum" over US President Donald Trump's claim that the Indian leader asked him to mediate on the matter.

The Ministry of External Affairs has rejected Trump's remarks, made during his meeting with Pakistan Prime Minister Imran Khan, that Modi had asked him to mediate in resolving the Kashmir issue with Pakistan.

Reacting to the MEA's assertion, Congress's chief spokesperson Randeep Surjewala said reiteration of the time-tested line on "no mediation on Kashmir" is welcome. The US president's remarks "relate to a meeting between him and PM Modi, wherein our PM had asked him to mediate", he said in a tweet. "Why is PM 'mum' on what transpired between the two heads of states, more so when it affects our sovereignty?" Surjewala asked.

In another tweet, he tagged the remarks of Trump put out by the White House. "Now, 'Whitehouse' puts up @POTUS assertion in 'black & white' that PM Modi asked him to 'mediate on Kashmir'!" he said. "When will our PM 'wake up' & call the bluff if President Trump is lying? Or Did PM Modi ask @POTUS to mediate?" Surjewala wondered.

Congress leader Milind Deora said that for the sake of India's national interest, all parties must rise above politics and welcome MEA's statement refuting the prime minister's alleged remarks. "We must also ask whether BJP would have extended the same courtesy to Dr Manmohan Singh had a US President made such a claim," he said.

The Congress along with other opposition parties on Monday night demanded a clarification from Modi on whether there has been a shift in India's position of no third party involvement in the Kashmir issue after Trump offered to mediate between India and Pakistan on the matter.

Surjewala had said India has never accepted third party mediation in Jammu and Kashmir. "To ask a foreign power to mediate in J&K by PM Modi is a sacrilegious betrayal of country's interests. Let PM answer to the Nation!" he had tweeted.

In another tweet, Surjewala said "deeply disturbing and distressing" is the claim by Trump that PM Modi made a "request to him for mediation on Kashmir". "No Indian PM has ever dared to breach the cardinal principle of 'no third party mediation' in terms of 1972 Simla Agreement.Why is PM mum?" he said.

Trump, who is known to make inaccurate statements, claimed Prime Minister Modi asked him to mediate on the Kashmir issue. "I honestly don't think Trump has the slightest idea of what he's talking about. He has either not been briefed or not understood what (Prime Minister) Modi was saying or what India's position is on 3rd-party mediation. That said, MEA should clarify that Delhi has never sought his intercession," senior Congress leader Shashi Tharoor tweeted earlier.

Former Jammu and Kashmir chief minister and National Conference leader Omar Abdullah on Monday wondered whether the Indian government will call the US President a liar or whether there has been a shift in India's position on third party involvement in dispute.

"Personally I think @realDonaldTrump is talking out of his hat when he says @PMOIndia asked for US involvement in solving the Kashmir issue but I'd like to see @MEAIndia call Trump out on his claim," Abdullah tweeted.

CPI(M) leader Sitaram Yechury asked whether "our twitter-friendly PM" has the courage to rebut the US president who has made a public statement. "What does this say about our long-held position of sovereignty over the Indian state of J&K, as defined in the Simla Agreement?" he said. "India has always maintained its a bilateral issue, with no scope for third-party interference. What is this government up to?" Yechury asked.

India maintains that the Kashmir issue is a bilateral one and no third party has any role.