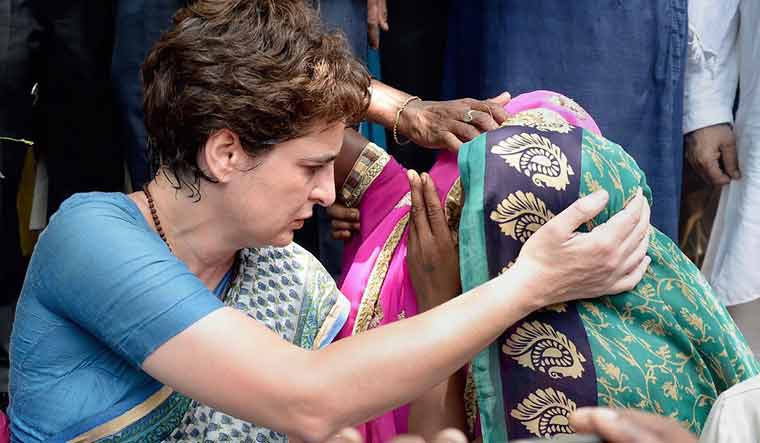 In the killing of 10 people at Sonbhadra, the Congress and the Samajwadi Party have found a call for action, which coincides with the ongoing session of the Vidhan Sabha in the state. Other outfits, however, warned that the incident is a warning of a deeper land ownership crisis.

“The state government used undemocratic means to stop the opposition from discharging its duties,” said Congress leader Pramod Tiwari. He also said that the state government had been brought to its knees by the Congress general secretary Priyanka Gandhi Vadra.

“She has stoked memories of her grandmother Indira Gandhi. The people of the state have seen her courage and determination,” he said.

Party members said that Priyanka’s actions lent an energy that was missing from the party even during the elections. “Our big leaders were content to sit inside air-conditioned offices. Now, there is a race to hit the streets,” said one such party member in Lucknow.

The action is also being seen as a sign of seriousness with which the party will take the 2022 state elections.

On Saturday evening, the party released a memorandum it had given to the governor asking for directions to be issued to the state government to permit Priyanka to meet the family members of those killed. Though this came after she had already met some of the family members, it is indicative of a flurry of activity quite unlike what the party has seen after its poor showing in the recent Lok Sabha polls.

The SP, which also put up a poor show in the polls, has meanwhile announced its plan for a contingent of party leaders and workers to reach Sonbhadra on July 23. The party has also ratcheted its demand for Rs 25 lakh as compensation amount to each family and land titles to be given in the names of the tillers. The party representation, which will go to Sonbhadra, will have a number of representatives from the Gonds—the tribal community to which the deceased belonged.

The party’s spokesperson Rajendra Choudhary said, “The government is misusing Section 144. The affected village has been cordoned off and no movement is being allowed. The government must take urgent steps or else a larger law and order problem could result”.

On Friday, MLAs and MLCs from the party had protested inside and outside the House, calling for the government to take action.

Meanwhile, various smaller political outfits working on land rights have warned that the Sonbhadra incident is a precursor to a larger crisis that will unfold as the Supreme court’s deadline for submission and acceptance of claim over lands under the Forests Rights Act ends.

A joint statement issued by the Swaraj Abhiyaan and the Rashtriya Mazdoor Kisan Party said that there must be a judicial inquiry of the incident. “We demand that the government form a commission to look into the land rights of tribals in the state. The state government must implement the Forests Rights Acts in right earnest. There should be a revenue fast track court to ensure timely disposal of land disputes” read the statement.

The state’s chief minister Yogi Adityanath is scheduled to meet the families of the victims between 11.45 pm and 1 pm on Sunday. The government also issued cheques worth Rs 5 lakhs to the next of kin of the deceased.