Kumaraswamy claimed that from day 1, an atmosphere was created to dislodge his govt 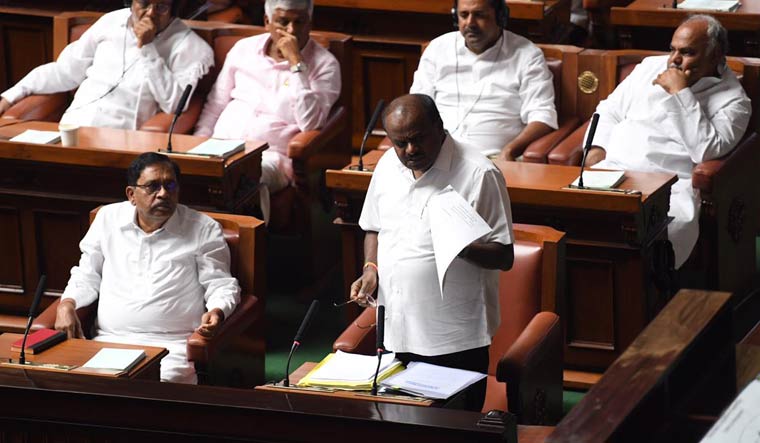 Karnataka Chief Minister H.D. Kumaraswamy on Friday asserted he would not misuse power to save his government, as he spoke on the confidence motion moved by him in the Assembly to decide the fate of his ministry. Interestingly, at 1.30pm on Friday, the 'deadline' issued by Governor Vajubhai Vala to Kumaraswamy to prove his majority ended.

Kumaraswamy alleged legislators were being offered “Rs 40-50 crore” to “lure” them. Kumaraswamy asked whose money this was. JD(S) MLA Srinivas Gowda alleged he was offered a Rs 5 crore bribe by the BJP to defect to bring down the government.

In his speech seeking the trust vote, Kumaraswamy charged that an atmosphere was created from day one that "this government will go" and it was unstable.

"After 14 months (in power), we have come to the final stage," Kumaraswamy said. "Let's have discussion. You can still form government. Nothing urgent. You can do it on Monday or Tuesday also. I am not going to misuse power," Kumaraswamy told the BJP.

Kumaraswamy also told BJP, "from the day I came to power, I know it won't be for long... how long you will sit in power, I am here to see... how stable your government will be with the people who are now helping you". Kumaraswamy began his speech after Speaker K.R. Ramesh Kumar made it clear when the House commenced its proceedings that there was no scope for any other discussion except the trust vote.

He said there was discussion and "indirect comments" made that he was delaying the process (vote of confidence). After making his remarks, the speaker asked the chief minister to speak on the debate on the trust vote, saying, "I am clear... no scope for any other discussion (except the trust vote)".

Within hours after the confidence motion could not take place with the speaker adjourning the day's proceedings in the Assembly, the governor had on Thursday shot off the letter to the chief minister setting the deadline of 1.30pm. Not surprisingly, the debate on Friday saw Congress and JD(S) MLAs protest against the governor.

The governor had observed that resignation of 15 MLAs of the ruling JD(S)-Congress and withdrawal of support by two independents "prima facie" indicated Kumaraswamy has lost the confidence of the House.