The fall of a powerful restaurateur 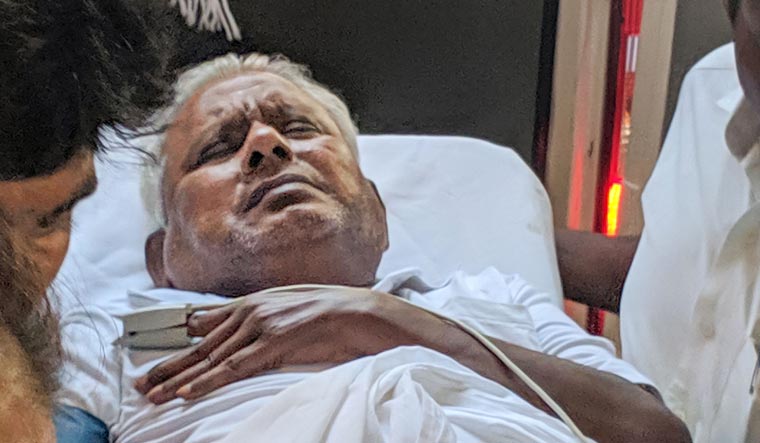 Saravana Bhavan founder P. Rajagopal arrives to surrender before a sessions court to serve a life term, in Chennai, on July 9 | PTI

The Madras High Court on Tuesday allowed founder of Saravana Bhavan chain of hotels and murder case convict P. Rajagopal, who remains critical after suffering a cardiac arrest, to be treated at a private hospital. After the court order, Rajagopal has been shifted from the prisoners’ ward at the Stanley government hospital to a private hospital in Chennai.

A division bench of Justices M.M. Sundresh and M. Nirmal Kumar granted the relief to Rajagopal, after hearing a habeas corpus plea filed by his son R. Saravanan.

Saravanan had informed the court that Rajagopal’s condition worsened as the doctors had changed the medication and treatment being provided to him. Saravanan in his petition also said that he would take responsibility of any glitches in his father’s health during the shifting.

Rajagopal surrendered on July 9, after the Supreme Court refused to accept his plea seeking more time. He was brought to the prison premises in an ambulance and was immediately sent to the prisoners' ward in Stanley hospital. Rajagopal had surrendered along with another accused in the 2001 case of kidnap and murder of Prince Shanthakumar, husband of one his woman employees, Jeevajothi.

Interestingly, Rajagopal’s is a curious case that has all the ingredients of an ever-thrilling Tamil film script—right from the rags to riches story to superstition, sex, scandal, money, kidnapping and murder. The founder of India’s most trailblazing South Indian vegetarian restaurant chain, Rajagopal, popularly known as ‘Annachi’ (elder brother), saw his downfall after 2001, following a fateful cosmic advice. After two decades of legal fight to make straight the consequences of a romantic rivalry and a wrongful lust for a woman, the 72- year-old restaurateur is critical, only to be shifted from one hospital to the other as a prisoner.

On July 7, as Tamil Nadu was debating the three-language policy, Rajagopal's story came calling, as he approached the Supreme Court citing health conditions to get reprieve from surrender. On July 9, the top court rejected his plea. Dressed in a white dhothi and a white shirt, with a line of ash on his forehead, Rajagopal was seen lying on a stretcher while surrendering before the sessions court. As the graph in the ECG machine was moving up and down, the men in khakhi and a few nurses pushed Rajagopal’s stretcher into an ambulance, to make him begin his life sentence.

The travails of the trend-setter in the restaurant sector began in 1981, when he came to Chennai from Punnaiyadi, a small non-descript village in Toothukudi and set up a grocery shop in KK Nagar. Hailing from a poor family, Rajagopal had his own ways of flourishing in the business. His hard work paid and his grocery shop grew multi-fold. Soon he took a bold step to set up a South Indian restaurant, in the late 1980s, at a time when eating out was still an unusual practice in the Tamil society. But he became a trend-setter with the delicious coffee and South Indian Idli, dosa and the sambar in his menu. Home made taste at an affordable price became his winning mantra. Within a decade, Rajagopal’s graph rose high as he went on to spread his wings with a chain of restaurants across Chennai, then in Dubai and Singapore. He had 80 outlets across the globe when, in the late 90s, greed, dishonesty and corruption began creeping into his life. He got married for the second time, taking Kriuthiga, wife of one of his employees, as his second wife. His business graph continued to move upwards.

Even as the business flourished and Saravana Bhavan grew into a brand by itself in the South Indian restaurant sector, Rajagopal’s first step to downfall began in 1994. Ravi, an astrologer who has been recorded as a victim in the police chargesheet, had reportedly advised Rajagopal that marrying Jeevajyothi, daughter of one of his employees, Ramaswamy, would bring him good fortunes. Annachi began stalking Jeevajyothi who, however, was in love with Prince Shanthakumar, the maths tutor of her brother. One fine day in 1999, as Rajagopal had his dreams high to marry Jeevajyothi, she eloped with Shanthakumar to marry him. But Rajagopal spotted her again when her mother Thanvam came seeking help. He helped the family set up a travel agency with a loan of Rs 1 lakh in Velacherry. But his attempts to cool off Jeevajyothi failed again. This was when he plotted, along with his manager Daniel and seven others, to eliminate Shanthakumar.

When the news of murder came out,Rajagopal, Daniel and his men surrendered before the Tirunelveli magistrate court. Later, he was convicted by the Poonamallee sessions court with 10 years of imprisonment. But Rajagopal’s lust for Jeevajyothi continued. Coming out on bail, he started stalking Jeevajyothi again. He offered Rs 6 lakh gold and ornaments as he went on to meet Jeevajyothi at Vedaranyam. However, he was rearrested and was found guilty under Section 302. In 2009, Rajagopal was awarded life sentence by the Madras High Court. He evaded arrest, citing health reasons and moved the Supreme Court. However, the apex court on July 9 made him surrender.

Now decades later, law is chasing Rajagopal when he is critically ill and wants a reprieve.