The move comes amid strained relation between BJP, JD(U) 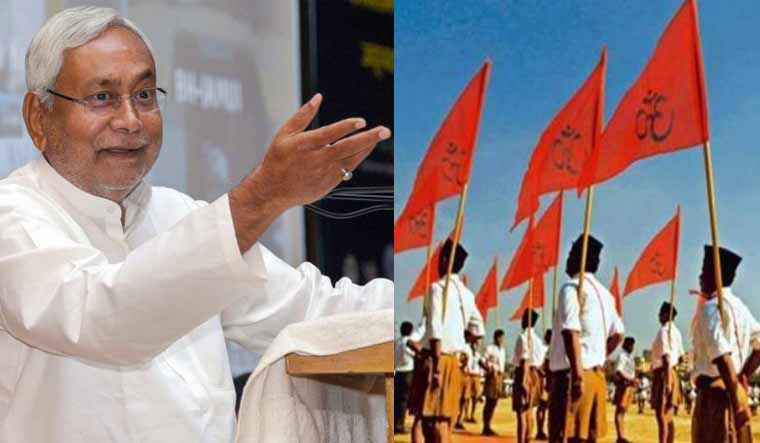 Even as the relations between the Bharatiya Janata Party and the Janata Dal (United) remain strained after the formation of the second Narendra Modi government at the Centre, a new report claims that Bihar Chief Minister Nitish Kumar has directed the police to collect details of all office-bearers of the Rashtriya Swayamsevak Sangh and other right-wing organisations in the state.

The Superintendent of Police of the Special Branch has assigned this task to all his Deputy Superintendents of Police (DSPs) and directed them to report back within a week, reports the New Indian Express which also claims to have accessed a letter issued in this regard on May 28.

It's not clear whether the DSPs have already submitted the reports. According to the newspaper report, the Special Branch is tasked with confidentially briefing the chief minister.

The fresh move comes amid reports that all is not well between the BJP and its Bihar ally after the Lok Sabha elections. Since the NDA swept the state bagging 39 of the 40 seats, the JD(U) wanted at least three ministerial posts in the Modi 2.0 government. However, the BJP was willing to give only one, prompting Nitish's party to stay out of the Union cabinet.

Nitish was a staunch critic of the Sangh when he was not part of the NDA. In 2016, he had even called for a 'Sangh-Mukt Bharat' (RSS-free India), eliciting sharp reactions from the BJP leaders.

However, the JD(U) chief softened his stand after his party rejoined the NDA, exiting the Mahagathbandhan.

In January 2019, Nitish, for the first time, lauded the RSS. “You can agree or disagree with their viewpoint, but what has to be noted is their commitment,” he had said.