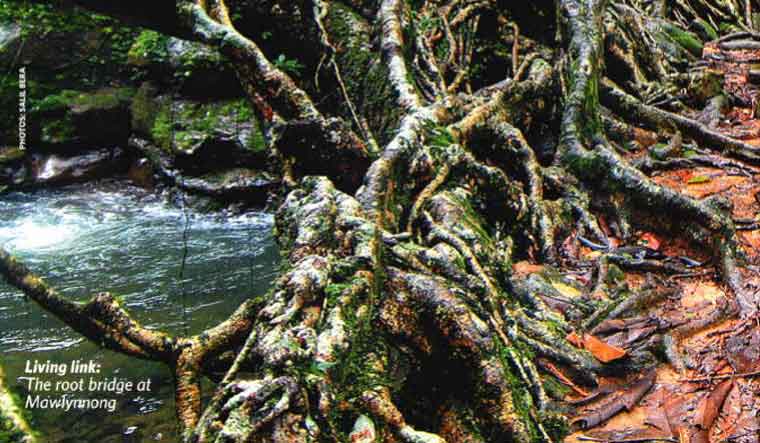 The root bridge at Mawlynnong. In the 2010 mid-year special, THE WEEK explored the region | Salil Bera

The village of Mawlynnong, famed as “Asia’s cleanest village” is now inundated, according to news reports. The state chief minister, Conrad Sangma has promised interventions to protect the hilly regions and plains. With the area now cut off from tourists, one of its chief tourist destinations manages to escape disaster by mere inches.

Mawlynnong’s living root bridges, rare bioengineering wonders with hundreds of years of legacy, are now poised above raging stormwaters. Twitter user Kushal Deb Roy shared what the bridge at the nearby village of Riwai looks like under current conditions.

This is how water passing beneath the Living root bridge in Riwai, Meghalaya. pic.twitter.com/FalRkaQkzn

Though the bridges seem only inches from disaster, locals assure THE WEEK that they are ok. Deepak Singh, a guest faculty at the English and Foreign Languages University in Shillong affirms that the bridges are still intact and that the waters rise every year due to the rainy season.

The region is no stranger to rain — Mawlynnong receives 5011mm of rain each year, ten times the national average. It is, after all, only 80km from Cherrapunji, the wettest place on earth with 9963 mm of precipitation annually. 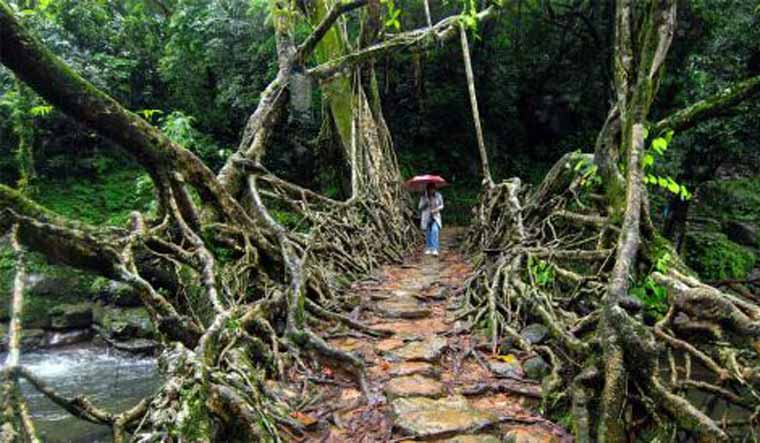 Living root bridges are feats of bioengineering and human perseverance. They need minimal material and maintenance cost — the only investments required are time and patience. The structures are designed and maintained by the indigenous communities across several generations. The knowledge and skill set required to make these is unique to these tribes in North Eastern rainforests. Ranging up to 250 feet in length and lasting over 250 years, they are architectural and natural marvels. These bridges breathe life to the tribal communities as well as the environment. They provide connectivity to isolated villages in the deep jungles across the turbulent waters. Further, they mitigate soil erosion and contribute to the surrounding ecosystem, with low carbon footprint, serving as remarkable examples of socio-ecological sustainability.

The living root bridges, locally known as jing kieng jri, are found on the humid, drenched slopes of the East Garo Hill. These plant-based ecosystems are nurtured by the indigenous Khasi and Jhantia tribes of Meghalaya, on the slopes bordering Bangladesh. Built by the sturdy root system of Ficus elastica trees, the bridges stand as monuments of the would-be sustainable relationship between man and nature.

Its routes are weaved by roots that grew over a span of several decades. The secondary roots of Ficus elastica, a species of the Indian rubber tree, intertwine over the years to build the sturdy structure. On either bank of the river or stream, tree trunks are planted, which serve as solid foundations for the growing pedestrian bridge. These tree trunks, which are manually hollowed out, serve as a guidance system for the growth of the young elastica roots. The tribes also place a bamboo scaffolding for the intertwined roots providing further reinforcement.

This scaffolding needs to be regularly replaced as the humidity and precipitation can cause the bamboo to rot. After 30 to 40 years, the structure becomes strong enough to withstand human weight allowing the bamboo scaffolding to be removed. Interestingly, unlike contemporary cement structures, the living root bridges grow stronger with time. With pedestrian use, the soil becomes compacted, making the structure more resilient. They can also withstand flash floods, storms and the ravages of time.

Though the eco-technology of these bridges has been growing in popularity, many may still be at risk. In an interview with InHabitat, Patrick Rodgers, author of the book The Green Unknown: Travels in the Khasi Hills, claims that only a few living root bridges are documented, with many undocumented bridges disappearing over the years. Rodgers suggests that the bridges be declared a UNESCO designated heritage site — a move that would ensure institutional protection for them from the ravages of man and nature.

While the footage of the bridge over troubled waters may seem worrying, this is not the first heavy monsoon these structures have survived. Hopefully, it will not be the last.

With inputs from Jelwin Varghese