In July 2018, India informed Russia it was ending cooperation on developing the Su-57 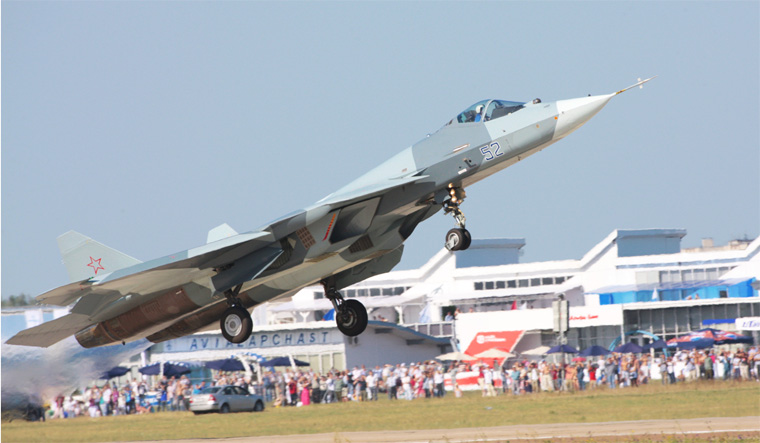 Representational image of the SU-57 | Sukhoi

A year after India formally announced the end of its cooperation with Russia to develop a variant of the Su-57 stealth fighter, a senior official from Moscow has offered to resume the partnership.

Vladimir Drozhzhov, deputy director of Russia's Federal Service for Military and Technical Cooperation, was speaking with reporters in Moscow on Tuesday. He was quoted by Russia's state-run TASS news agency as saying, “I believe that we should resume this project; Russia is open to that”.

India and Russia began a partnership to co-develop a variant of the Su-57 even before the aircraft made its maiden flight in 2010. India and Russia had agreed to develop a variant of the Su-57 called the Fifth-Generation Fighter Aircraft (FGFA), which would feature Indian systems and be customised for the needs of the Indian Air Force. The total cost of the shared project was estimated to be around $30 billion. The Indian Air Force had a projected requirement of 214 FGFA jets.

Years of negotiations proved indecisive and in July 2018, then defence minister Nirmala Sitharaman told reporters the Indian government had conveyed to Russia that “they can go ahead with the project and we (India) may join it at a later stage”.

In June this year, Russian Minister of Industry Denis Manturov said the Russian Air Force would induct 76 Su-57 jets by 2028.

Drozhzhov also told reporters that Russia has offered India co-development of a variant of its Amur-1650 diesel-electric submarine.

Drozhzhov was quoted by TASS as saying, "We are not putting forward [an idea of] usual licensed production of submarine; we are proposing to jointly devise a project with our Indian partners and jointly build the first pilot model on the basis of the Amur-1650 diesel-electric submarine project, equipped with an air-independent propulsion system.”

Declaring that the Russian offer involves transfer of technology, Drozhzhov claimed Moscow's preliminary proposal for joint development of a submarine was “much more favourable than those of other foreign partners”. Drozhzhov also emphasised the proposed submarine would be equipped with the Brahmos cruise missile system.

The Amur-1650 submarine has been offered for export for over a decade. It has been described as the successor to the successful Soviet-era 'Kilo' class submarines. The Indian Navy bought a total of 10 Kilo class submarines from the Soviet Union and Russia in the 1980-1990s and nine remain operational.

The Indian Navy is currently soliciting proposals to build six submarines under 'Project 75I', for a contract valued around Rs 50,000 crore. These submarines are expected to have air-independent propulsion for enhanced underwater endurance and land-attack missiles.

The Amur-1650 has been offered by Russia, while companies from France and Germany are also bidding. The project has dragged on for years with little progress.