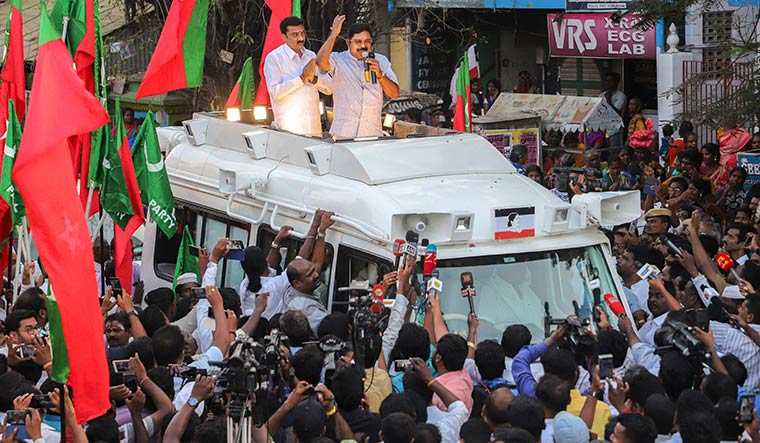 T.T.V. Dhinakaran and his fledgeling AMMK, which faced a major debacle in the recently concluded Lok Sabha polls and by-polls to 22 constituencies in Tamil Nadu, is all set to witness yet another blow. The party’s propaganda secretary Thanga Tamil Selvan is likely to switch over to the ruling-AIADMK amidst stiff resistance from his nemesis O. Panneerselvam.

An audio clip, in which Tamil Selvan comments on Dhinakaran and his inept politics, have gone viral since Monday. In the audio clip, the former Andipatti MLA is heard talking to one of the personal assistants of Dhinakaran and saying, “If I take Vishwaroop you will all get wiped off". Selvan’s audio clip became viral, as the leader had been maintaining a low key since the Lok Sabha polls, thus adding to the theory that he is distracted and might switch camps. Selvan was popularly known as the right-hand of Dhinakaran.

Reacting to the audio clip, Dhinakaran said, “Action will be taken against Tamil Selvan for anti-party activities.” He said AMMK is not dependant on any particular person for the party’s growth and that he will not stop anyone who wants to quit AMMK.

However, Tamil Selvan is the third senior leader quitting AMMK after expressing displeasure over T.T.V. Dhinakaran’s approach to politics. Earlier, a senior leader and former transport minister Senthil Balaji joined the DMK and following him, Central Chennai strong man V.P. Kalairajan also joined DMK. Tamil Selvan, according to sources, will soon join Chief Minister Edappadi K. Palaniswami’s camp in the AIADMK. According to sources, Tamil Selvan was clearly upset since the party lost the 18-MLA case in the Madras High Court. TN Assembly speaker P. Dhanapal, expelled 18 AIADMK rebel legislators under the anti-defection law. The Madras High Court upheld the decision. However, it was later found that they had been wrongly disqualified.

While Senthil Balaji chose to switch over, Tamil Selvan decided to stay back as there were high expectations on Dhinakaran that he would win at least a few constituencies. Incidentally, Tamil Selvan was the only AMMK candidate to score more than 1,40,000 votes, from the Theni constituency, where he contested against OPS’s son O.P. Raveendranath Kumar. Tamil Selvan finished third, after Congress candidate EVKS Elangovan.

According to party insiders, Tamil Selvan’s rebellion against Dhinakaran grew as Tamil Selvan was not invited for a party meeting in Theni held a few days ago to discuss the party’s failure at the polls. When THE WEEK tried to reach Tamil Selvan, his phone was switched off and sources said that he was in Theni. Dhinakaran’s AMMK, which was looked at as a strong competitor to AIADMK till before the elections, has begun losing its sheen owing to poor performance in the elections. Tamil Selvan’s rebellion will only add to the growing crisis within the year-old AMMK.