In line with the neighbourhood-first policy, Modi will visit Maldives and Sri Lanka 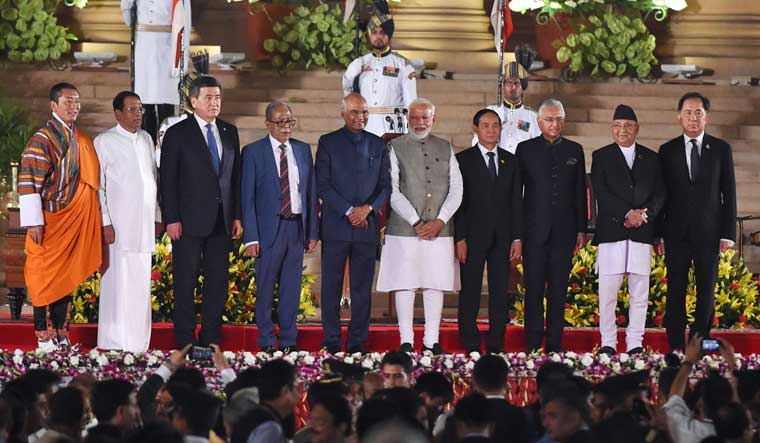 Narendra Modi's new government is losing no time in reaching out to its eastern neighbours and consolidating the foreign policy gains it made during its first tenure. Following close on the heels to the invitation to Bay of Bengal Initiative for Multisectoral Trade and Economic Cooperation (BIMSTEC) nations, both the prime minister and External Affairs Minister S. Jaishankar are heading out on their first foreign visits in their new appointments.

Prime Minister Modi will head to the Maldives on a state visit on June 8, an honour usually reserved for heads of state and he will then head to Sri Lanka. Jaishankar, meanwhile, will head to Bhutan on a two-day tour. The message is loud and clear that these are the priority countries for the goverment, an eastern neighbourhood that has not been given the thrust it deserved. A neighbourhood that, by its geography, excludes Pakistan. A neighbourhood, which, by its geography is where India needs to stamp its presence and not allow China to steal a march.

Jaishankar, in his first address as minister at an event organised by the think tank Ananta Centre, made it clear that the government's focus would be the BIMSTEC nations in the next five years. Without naming Pakistan, he said the South Asian Association for Regional Cooperation (SAARC) had issues, even apart from terror, while the BIMSTEC vision on connectivity was lucid and in Iine with India's thinking.

Speaking to mediapersons, Foreign Secretary Vijay Gokhale said that India's relations with Maldives had improved vastly since the Ibrahim Solih government came to power last year. He said this was the first visit by an Indian prime minister to Male after Manmohan Singh's 2011 visit. Modi had gone for Solih's swearing in last November but that was only restricted to the inauguration.

Modi will inaugurate two India-sponsored projects in the Maldives, the coastal surveillance radar and the Composite Training Centre for Maldives National Defence Force. The first project is in line with India's initiative to monitor white shipping in the Indian Ocean Region. India has gifted such radars to other countries, too. Last year India announced a USD 200 million budgetary support to the island nation, USD 50 million in cash and the rest as treasury bills. India's financial assistance is to reduce the monetary burden of the country, which is reeling under debt from China, taken during the previous Abdullah Yameen regime. India also announced lines of credit worth Rs 180 crore and has also identified three projects for it: water supply and sewage treatment in 36 islands, a development centre at Addu city and a small and medium enterprises development financing project.

India is wooing Maldives in every way possible, now that there is a pro-India government in Male. After inviting Solih to an IPL match at Bangalore, India has now been asked to help them set up a cricketing culture there. India also gifted two lakh LED bulbs for street lighting in Male city, to help the country's climate change initiative.

The objectives of Modi's visit are to maintain contact at the highest levels, to deepen the partnership and to strengthen people-to-people contacts, said Gokhale. The Colombo trip, on the other hand, is to express solidarity with the people and government of Sri Lanka. Modi will be the first international leader to visit Sri Lanka after the Easter bombings. His visit will also signal India's committment to build on the relationship and deepen partnerships.

India is also investing in various projects in Sri Lanka, most of which are for improving the lives of the people there. There are Rs 250 crore worth community projects in various stages of completion. These include the free emergency ambulance service, already operational in several districts as well as a 14,000 homes for upcountry Tamils. The first phase of 1,500 houses were handed over last August.

India has also begun new investments in Sri Lanka on a trilateral basis with Japan. These include developing an LNG terminal, a water supply project and the development of East Container Terminal of the Colombo port.

Gokhale said that there would be more such trilateral initiatives with like minded nations in the coming months and years. While the tie-up with Japan for developing Sri Lanka does appear as if it is to reduce the Chinese footprint there, Gokhale stressed that India's co-operation with any country should not be viewed as directed against another, or part of a larger game plan.

The projects fit neatly under the umbrella of the SAGAR (Security and Growth for All in the Region) doctrine.

Jaishankar's Thimpu visit, meanwhile, is significant, too. The ministry of external affairs said it reflects the importance India attaches to Bhutan. Indeed, the tiny Himalayan kingdom is important to India, a buffer against the other neighbour China. The Doklam stand-off did cause any strains on Bhutan's ties with big brother India. While India works at ironing out differences in ties with China through big unofficial summits (after Wuhan, the next will be hosted in India this year), there is also the need to continuously reassure Bhutan.