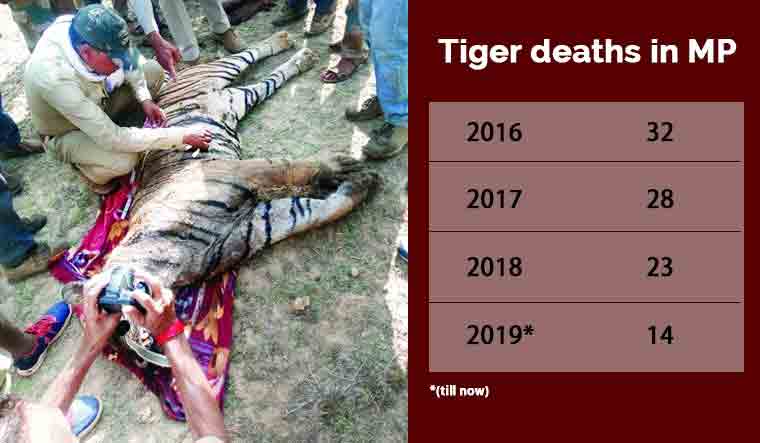 A tiger was killed by a live wire trap in territorial forests in Majhgawan range of Satna district on Monday. This is the 14th tiger death in the state in 2019. Three villagers, who had allegedly laid the trap for game meat, have been arrested, forest officials confirmed.

The carcass of the tiger was found in the Amirati beat of Dudhmania forest near a water canal on Monday. Initial spot investigations and later postmortem confirmed that the tiger was electrocuted. “The death is due to electrocution and three local persons have been arrested for laying a live wire trap near a water source,” Madhya Pradesh chief wildlife warden (CWLW) Dr U. Prakasham told THE WEEK. He said initial probe suggests it was not a case of poaching, but the villagers had laid trap for other animals, possibly for their meat.

Activists have blamed the tiger death on failure of patrolling in the summer months when the forests become sparse and spotting an animal becomes easy. “Along with this factor, there is the issue of illegal tendu leaves collection and illegal mining activities in the area where the incident has occurred. This is a collective failure of the authorities and especially, forest department that should have intensified the patrolling near water sources, which become a natural point of movement for tigers and prey animals during summers,” wildlife activist Ajay Dubey said.

The CWLW conceded that due to staff and resource crunch, it often becomes difficult to get an entire territorial forest area patrolled intensively for a whole day and night. One forest guard is responsible for an area of 10 sq km and it is difficult to keep vigil on all parts always. “The protected forest areas like sanctuaries and national parks have additional staff and budget for the purpose. However, with the given resources, all necessary patrolling efforts are made even in territorial areas. There is always a scope of improvement in the efforts,” Prakasham said.

Madhya Pradesh, once known as the ‘Tiger State’, has been consistently losing highest number of tigers each year. According to the 2014 wildlife census, the state had 308 tigers—the third-highest in the country, behind Karnataka and Uttar Pradesh. According to available statistics, 97 tigers have died in the state since January 2016, many of them victims to poaching.