'Kashmiri Pandits to take up genocide of community at UN, world forums'

Pandits were forced to flee Kashmir Valley from January 1990 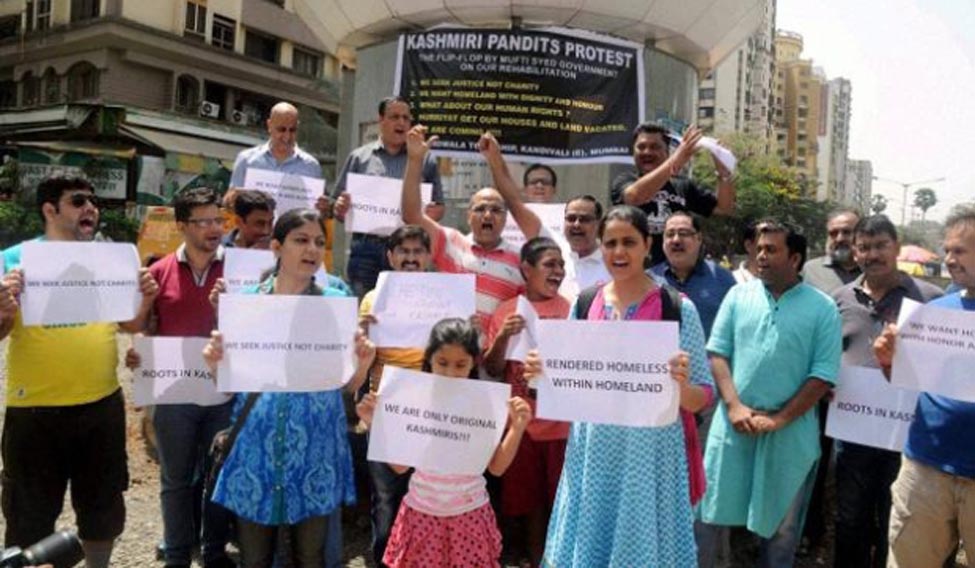 Ahead of the thirtieth anniversary of exodus of minority Hindus from the valley, a global Kashmiri Pandit organisation will take up their genocide and ethnic cleansing strongly at the UN and other important world fora.

However, the organisation strongly appreciates Governor's administration for dealing with separatist and terrorist elements in Kashmir in accordance with the law of the land

"Global Kashmiri Pandit Diaspora (GKPD) will take up the genocide and ethnic cleansing of Pandits strongly at the UN and other important world fora as well as reputed human rights organisations in different countries of the world to build consensus of opinion on the issue," GKPD Chairman K L Chowdhury told reporters here.

Pandits were forced to flee Kashmir Valley from January 1990 onwards in the wake of spread of terrorism in 1989-90.

"We have collected the data of killings of minority Kashmiri Hindus in valley by terrorists, temples damaged and destroyed, houses destroyed and encroached of properties of KPs, high degree of deaths due to post traumatic syndrome, major health issues of women, decrease in population, late marriages, loss of language and culture among youngsters", he said.

It will be proof before the UN, human rights and other organisations for the case of genocide, Chowdhary said.

The Political Steering Committee (PSC) of GKPD, an initiative by uprooted Kashmiri Pandits across the globe, organised an interactive session of prominent KPs at Jammu to deliberate on the new challenges and way forward for the displaced community.

He claimed that while human rights violation cases of far less consequence were expeditiously pursued by the State or the central government over the years, not a word has been said about the genocide of the Kashmiri Pandits.

The community is, however, appreciative of Governor's administration dealing with separatist and militant elements in accordance with the law of the land, PSC Chairman Moti Kaul said.

"For the first time in the three-decade-old history of terrorism, fundamentalism in the state, the actors behind the sedition stand exposed, their networks busted and their funding sources choked," he said.

He said that it is shameful that no mainstream political party on regional or national level except the BJP included in their manifestos about the rehabilitation of the displaced Pandits in their homeland.

Prof K.N. Pandita in his address said, "It is an irony that in spite of the demand of the entire displaced community of 700,000 people, the state and the central governments never set up any commission of inquiry to probe the causes and course of the genocide and extirpation of a defenceless and unarmed community known for its peaceful and nonviolent behavior."

He alleged that the only reason for the governments to decline setting up of an impartial commission of inquiry is that many "ugly truths" will be uncovered and many actors in the perfidy will be exposed.