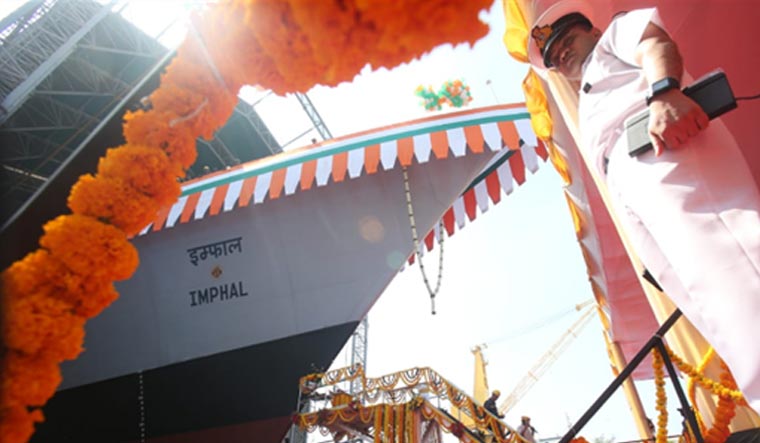 At noon on Saturday, Reena Lanba, first lady of the Indian Navy family, broke a coconut on ship's bow to launch the INS Imphal, a new, stealthy, guided missile destroyer. The wife of Navy Chief Admiral Sunil Lanba, she presided over the ceremony amidst chanting of slokas from the Atharva Veda, in keeping with maritime traditions.

With this, the 3,037-ton warship made its first contact with waters.

INS Imphal is the first warship to be named after a city from one of the "Seven Sisters" Northeast states.

The ship was launched at the Mazadon Dock Shipbuilders Limited site in Mumbai, and is the third ship of Project 15B, marking a significant milestone in the annals of India's indigenous warship design and construction programme.

Last year, in a bid to counter the growing presence of Chinese warships in the Indian ocean region, the government gave its nod for the Indian Navy's expansion and upgrade plan, which includes incorporating 56 new ships and submarines. Some of these will replace the existing fleet, while some will include new ships like fleet ships, submarines and mine sweepers. While the construction plan would be spread across a decade, the new acquisitions would be in addition to 32 indigenous warships and submarines already under construction in multiple shipyards.

According to the navy, Project 15B ships feature cutting edge advanced technology and are comparable to the best ships of their class anywhere in the world. These ships have been designed indigenously by the Indian Navy’s Directorate of Naval Design, headquartered at New Delhi.

According to a Navy statement, "Each ship spans 163 metres in length and 17.4 metres at beam and displaces 7,300 tonnes. These ships will be propelled by four gas turbines to achieve speed in excess of 30 knots." The Navy claims that  the Project 15B destroyers incorporate new design concepts for improved survivability, sea keeping, stealth and manoeuvrability.

"Enhanced stealth features have been achieved through shaping of hull and use of radar transparent deck fittings which make these ships difficult to detect. P15B ships will be equipped to carry and operate two multiple role helicopters," reported the navy statement.

The Navy added that these ships are packed with an array of state-of-the-art weapons and sensors, including multi-functional surveillance radars and vertically launched missile systems for long distance engagement of shore, sea-based and air targets. "With significant indigenous content, these ships are a true hallmark of self-reliance attained by our country in warship design and shipbuilding, and a shining example of the ‘Make in India’ philosophy," Navy spokesperson Captain DK Sharma said.

He also mentioned that the Indigenous Aircraft Carrier, INS Vikrant, is undergoing outfitting at Kochi shipyard Ltd and its harbour acceptance trials are in progress , with sea acceptance trials to commence in the latter half of the year, and an expected delivery to the Navy by 2021.