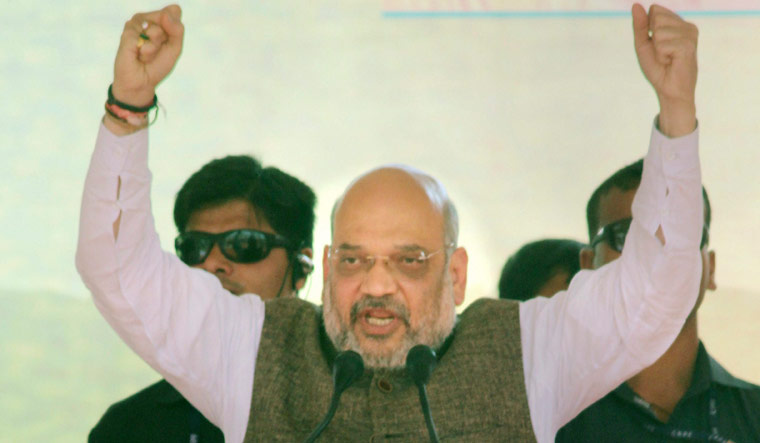 Amit Shah’s favourite game is chess. He was the president of the Gujarat State Chess Association. Shah has made his moves strategically, checkmating many kings with even pawns. He is the reigning grandmaster of Indian politics.

The wait for the BJP national president entered an hour at the Marriott hotel in Nedumbasseri, Kochi. Party leaders kept updating their president’s whereabouts. They lower their voice while speaking about their president—such is the respect and fear Shah commands.

Because that’s who Amit Shah is: A man of many mysteries. For critics and supporters alike, he is the new-age Chanakya. Some of his stories have a mythical nature to it. While sipping tea at a small restaurant in Ahmedabad in the early 1990s, Shah told his friend sitting across him, “Narendra Bhai, get ready to become India’s prime minister”.

Shah, who forayed into politics in his early days even while helping his father run a pipe business, then became a share trader. That might have sharpened his political aptitude. Indian politics’ most famous partnership was born in 1982, when Narendra Damodardas Modi met Shah.

The mention of that name brought a glow to Shah’s face and strength to his voice in an interview with Manorama. Modi thinks about victory only and Shah solutions alone. That’s the secret of this partnership, say BJP supporters. Modi is the 'vision' and Shah, the 'mission'.

“Win over NSS and Christian congregations. That’s the only way in Kerala,” Shah tells state leaders visiting him. They might have been discussing the fruition of that plan behind closed doors. Pillai looked glad as he came out of the room, saying, “the national president is confident and hopeful of a good show. They analyse information accurately.” Venkaiah Naidu could be the only other leader who has studied Kerala so much, he said. There is no other leader so adept in decision making and execution, said Krishnadas.

Has the BJP set a target of 400 seats this time? Surveys have predicted a maximum of 279.

There is no such target. It is a tough task for any survey agency to read India’s mind. But we feel their (people's) ‘pulse’ by constantly interacting with them and travelling the length and breadth of the nation. The NDA will gather more seats than last time, and Narendra Modi will be prime minister again.

Has Pulwama become a major hope and weapon?

National security is of prime importance to us. What can we say if the Congress and Communists do not feel the same? We are showcasing NDA’s achievements from all spheres.

Isn’t it impossible to repeat the Uttar Pradesh victory? Are your chances as good in the entire Hindi belt as in 2014?

We won’t lose seats in Uttar Pradesh. Such is our organisational strength there. Some seats may be exchanged. We are going to gain more seats in northeastern states, Odisha, West Bengal and southern states. We will win the 60 seats lost last time. Those 60 seats will make up for any loss whatsoever elsewhere. We are going to win more than half of the seats in Bengal. We are in a direct fight with Trinamool Congress there. Congress and Communists are nowhere in picture there.

In Kerala, both the fronts are seeking the defeat of BJP. They will settle for any other alliance to come to power. I am not surprised. Both are our adversaries. They don’t wish to see BJP’s success. But a big change is panning out in Kerala this time. I am absolutely confident about that.

BJP will have a grand opening with at least 5 seats. At least 5, remember.

It is not right to say where we will win or lose upfront.

What electoral issues are BJP highlighting in Kerala?

The Central government has taken several measures for the betterment of Kerala in the last five years. It has increased Kerala’s share of Finance Commission (allocations). Basic infrastructure and railway developments were carried out. We know that the propaganda against Central government paints a poor picture of us here. We don’t think a Communist government will talk good about a BJP government.

Think about the Kerala government. The amicus curiae report on the floods alone is enough to realise the state government is a failure. In the federal system, they have the responsibility to rule. If they can’t, hand it over to us, we will!

Will Sabarimala be the reason that you put up a good show this time?

I don’t consider Sabarimala a main issue. It pains crores of people. There are so many Supreme Court orders left unimplemented, for example the one on the use of loudspeakers in masjids. Does the Communist government have the guts to implement that? Their vote bank will be shattered. But why rush into implementing Sabarimala verdict? Pinarayi Vijayan has to answer.

Can we expect an ordinance to save the customs in Sabarimala if BJP returns to power?

The issue is under Supreme Court’s consideration now. We hope it will take a just decision, studying all aspects of the problem. Let the court decide first, ordinance is the next option.

I can only say Rahul Gandhi is not safe in Amethi this time. Nothing more. He has the right to contest from anywhere he wants.

Many have sought an apology from you for equating Wayanad with Pakistan.

There is no need to apologise in that issue.

Yes. What I said was absolutely clear.

Who is the BJP’s key rival in Kerala?

We are fighting both fronts. The people of Kerala should realise neither Congress nor Communists can lead India. They cannot ensure security to the country. The CPI(M) and the CPI will be destroyed after this election. It has happened in Bengal and Tripura. It will happen in Kerala too.

Are you referring to the next assembly polls?

Much before that. This election will herald a new beginning.

You are contesting this time. Is the Rajya Sabha member’s Lok Sabha bid pointing to your entry into Parliamentary politics?

It need not be interpreted so. I have always wished to enter a house elected by the people. The party nominated me to the Rajya Sabha since that was the first election that came up as my (Gujarat) Assembly term ended. Now, since the Lok Sabha polls are here, I want to seek people’s mandate. I could have been a minister even from Rajya Sabha. Hence such speculations are immaterial.

In this election, the opposition is banking on arithmetic and you on chemistry.

Chemistry always wins. I believe in it. I have proved it too.

Amit Shah is a graduate in bio-chemistry. Let’s wait until May 23 to see if his mix of elements wins India’s electoral heart again.

This article was originally published in onmanorama