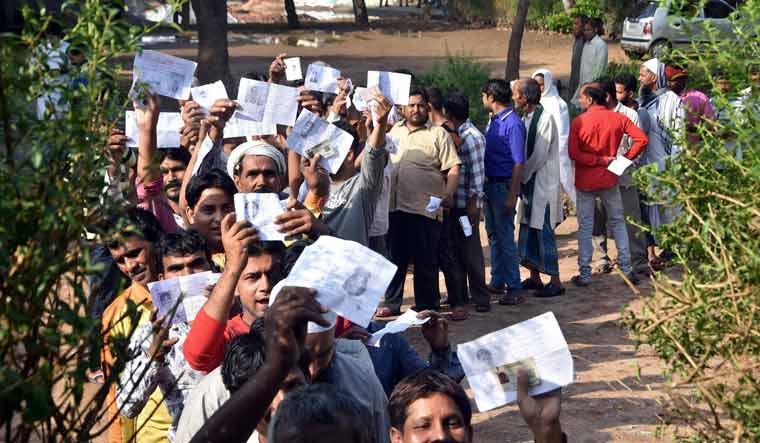 Voters outside a polling station in Mathura | PTI

Polling was slow in the early hours of voting in 95 seats across 11 states, including Tamil Nadu where 38 seats are up for grabs, and the Union territory of Puducherry in the second phase of Lok Sabha elections in which a former prime minister and four union ministers are in the fray.

Voting was also under way in 35 assembly constituencies in Odisha and in 18 assembly seats in Tamil Nadu, where bypolls were being held.

There were reports of glitches in EVMs in Tamil Nadu and Bihar and sporadic violence in West Bengal. However, polling was largely peaceful in the rest of the country.

The BJP is looking to defend 27 seats in this phase, including eight in western Uttar Pradesh, three in Chhattisgarh, six in Karnataka, four in Maharashtra and two in Assam.

The Congress is seeking to defend 12 of the seats it won in the 2014 polls including six in Karnataka, two each in Assam and Maharashtra and one each in Bihar and Manipur. The party is aiming to improve its performance in Tamil Nadu, Karnataka, Maharashtra and Odisha.

Over 15.80 crore voters are eligible to decide the fate of 1,600-odd contestants.

Amidst tight security, polling was under way in Srinagar Parliamentary constituency of Jammu and Kashmir to decide the fate of 10 candidates, including NC president Farooq Abdullah, who is seeking a re-election.

Security personnel have been deployed in strength in and around polling stations in all three districts—Srinagar, Budgam and Ganderbal—of the constituency, officials said. However, they said most of the polling booths in Srinagar wore a deserted look. As many as 12,90,318 voters are eligible to decide the fate of 10 candidates. 1,716 polling stations have been set up in the constituency.

Tamil Nadu recorded 13.48 per cent voting till 9am in 38 Lok Sabha constituencies where Union minister Pon Radhakrishnan, DMK's Dayanidhi Maran and Kanimozhi and Karti Chidambaram of the Congress are among key contenders.

Tamil Nadu Chief Minister E.K. Palaniswami was among the early electors in his native Salem district. While senior Congress leader P. Chidambaram voted at Kandanur in Sivaganga district, AMMK leader T.T.V. Dhinakaran excised his franchise along with his family in Chennai.

Technical glitches delayed the start of polling in a number of booths.

Polling for the lone Lok Sabha seat in Puducherry was under way along with voting for the bypoll to fill the vacant Thattanchavady assembly seat.

In Karnataka, an estimated 7.60 per cent voter turnout has been reported till 9am in 14 constituencies where there is a direct contest between Congress-JD(S) alliance and BJP.

Highest turnout was recorded at Dakshina Kannada with 14.94 per cent and least in Bangalore Central with 5.41 per cent till 9 am, poll officials said.

While Union Minister D.V. Sadananda Gowda, who is BJP candidate from Bangalore North, was among the early ones to cast his vote, Chief Minister H.D. Kumaraswamy along with wife Anita and son Nikhil, who is JD(S) candidate from Mandya, cast their vote at Kethiganahalli that comes under Bangalore Rural constituency.

Prominent contestants in the first phase include former Deve Gowda (Tumkur), his grandsons Prajwal Revanna and Nikhil Kumaraswamy from Hassan and Mandya, respectively.

In Uttar Pradesh, voting is progressing at a slow pace with an overall polling percentage of 10.76 being reported from the eight parliamentary constituencies in the state during the first two hours.

Voting was yet to pick up in Bihar where about 9.2 per cent of the over 86 lakh electorate exercised franchise in the first two hours of polling.

Kishanganj and Banka recorded highest turnout at 10.5 per cent each in first two hours, followed by Bhagalpur at 10 per cent, Katihar at 8 per cent and Purnea at 7 per cent, the CEO office said.

Voting was hampered briefly at several poll stations at Masuria in Banka town, Kahalgaon assembly segment in Bhagalpur and Purnea.