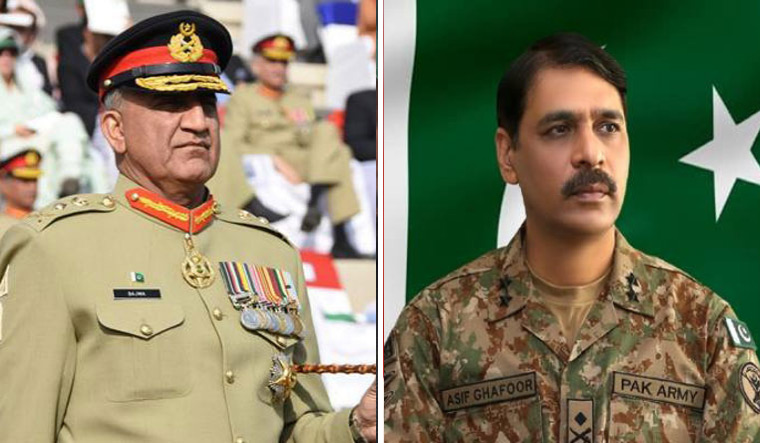 The rising India-Pakistan tension in the last few months that peaked during the Balakot strike has brought stress upon the Pakistan Chief of Army Staff (COAS) General Qamar Bajwa in more than one way. While Pakistan literally slept when Indian jets bombed Balakot—a fact that has not been denied by Islamabad—it has also led to rising insecurities for Gen Bajwa.

From his numerous appearances in the media, revealing critical information about the air operations to negating claims of Indian Airforce, General Ghafoor literally stood as the face of Pakistan.

“It is difficult to remember the last time, when a DG, ISPR garnered so much media highlight, that almost over shadowed the COAS. The point to be kept in mind is that unlike the Indian chiefs, the Pak army chiefs are poster boys of the media who love to be in the limelight,” a report by intelligence agencies said.

Maj Gen Ghafoor took over from his unassuming predecessor in 2016. Since then Gen Ghafoor has occupied more screen and digital space than the three service chiefs have collectively occupied in the last two months.

“The flamboyant Ghafoor is the most notable face of the country on television and his tweets and social media updates have attracted more likes and comments than that of Prime Minister Imran Khan,” a security official pointed out.

Gen Ghafoor’s known proximity to Prime Minister Imran Khan and President Arif ur Rehman Alvi has made the COAS even more cautious of his DG ISPR.

It is believed in close military circles that the Hilal-i-Imtiyaz awarded to the General on Pakistan Day was against the wishes of the COAS, who thought it was a bit pre-mature. This however, did not alter the nomination of Gen Ghafoor for the award that had the blessings of the Prime Minister.

The Hilal-i-Imtiyaz is the second highest civilian honour given to both civilians and military officers of Pakistan Armed forces by the Pakistan government for meritorious contribution to the security or national interests of Pakistan.

The tweets and posts by Gen Ghafoor have a distinct pattern of nationalistic fervor carefully hinting on his political ambitions.

“While the official tweets usually toe the line of the government and limit to his charter, the personal handle, ironically named, @peaceforchange is where he brews his nationalist image,” said an intelligence official.

The recent Facebook crackdown on fake accounts created by the ISPR is being seen as covert ways to keep the flamboyant general in his boots. Security officials here said the crackdown by Facebook on ISPR handles on Monday irked Ghafoor who retorted with a nationalist tweet from his personal account. “Nothing can take away Pakistaniat out of Pakistanis. Our patriotic behaviour is defined by our unparalleled love for our motherland Pakistan. We live to die for Pakistan; nothing else is there to deter our resolve. #StayPutPakistanis,” he tweeted.

This happened even while the ISPR denied the accounts belonged to it.

Interestingly, Gafoor’s rise in stature and the public support is not limited to just Pakistan. In India, he has gathered more eyeballs than any of his predecessors. Security experts said this has ruffled the ego of many of his counterparts as well.

“To assume that he is seen as a potential threat not only to the military hierarchy but also to the elected government won’t be a long shot,” said another security official.

Gen Ghafoor aims to be what Russian General Valery Gerasimov was to Vladimir Putin, but he, too, had to be bridled when the hierarchy felt threatened of his growing influence in Kremlin, said the observers.

It will be interesting to see how much of a loose rope Gen Bajwa gives Ghafoor. Or is Ghafoor preparing himself for a larger responsibility?