Indian Navy exercise with Australia: Will this warship be centre of attention? 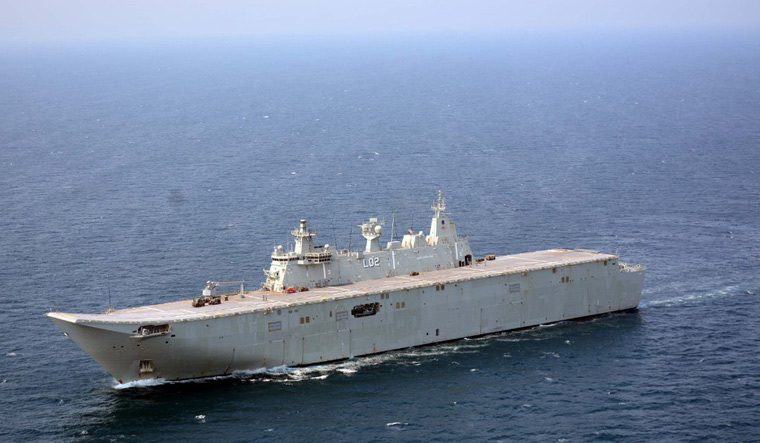 The Indian Navy announced on Tuesday that the third edition of 'AUSINDEX', a maritime exercise with the Australian Navy, had begun in Visakhapatnam.

An Indian Navy statement noted this edition of AUSINDEX would be held from April 2 to 14.

Have a look at the @Australian_Navy ships entering Visakhapatnam harbour a while ago.... 1/n pic.twitter.com/QzJWDEKX0S

The HMAS Canberra is a 'landing helicopter dock', a type of amphibious assault warship that can deploy troops and even tanks via helicopters and small landing craft stored inside its deck. The HMAS Canberra, which was built in Spain and commissioned in 2014, is 230 metres long and has a maximum displacement of over 27,000 tonnes.

In addition to deploying troops and tanks, LHDs are also extensively equipped to respond to humanitarian assistance and disaster relief (HADR) missions, which are becoming a key role of major navies. For example, the Indian Navy delivered aid to Mozambique in the wake of cyclone Idai two weeks ago.

The HMAS Canberra is a derivative of the Juan Carlos-I LHD, designed by Spanish company Navantia. The Juan Carlos-I design is being offered to the Indian Navy by Navantia, in collaboration with L&T, for a project to build four LPDs at an estimated cost of $2 billion.

The Indian Navy had first floated requirements to build LPDs nearly a decade ago. The Indian Navy issued a 'request for proposals' for the LPD project in 2011, but it has seen multiple delays, partially on account of financial difficulties on part of Indian shipyards partnering with foreign designers.

The Indian Navy had sorely felt the need for LPD-class ships during its response to the east Asian tsunami of December 2004. Until that time, the Indian Navy's largest ships for amphibious assault were tank landing ships, which are much more smaller and less versatile than LPDs. In 2007, the Indian Navy inducted INS Jalashwa, an amphibious assault vessel that was in service with the US Navy. The INS Jalashwa is still smaller than a LHD like the HMAS Canberra.

HMAS Canberra has a sister ship, the Adelaide, which was commissioned in 2015. That same year, Turkey selected the Juan Carlos-I design as the basis for its amphibious assault ship, which will also be capable of deploying the F-35B short takeoff and vertical landing fighter.

The other major contender for the Indian Navy's LPD project is the French company Naval Group (formerly DCNS), which is offering its 'Mistral' design in collaboration with Reliance Defence. The two Australian ships were built in Spain and delivered to Australia for final installation of various systems The Indian Navy has required that all four LHDs being built in Indian shipyards.

It can be argued LHDs are ideal for both 'hard power' and 'soft power' missions unlike other warships, a capability that becomes crucial at a time when China expands both military and commercial influence in the Indian Ocean.