Hundreds gathered at Wagah border to greet the IAF pilot 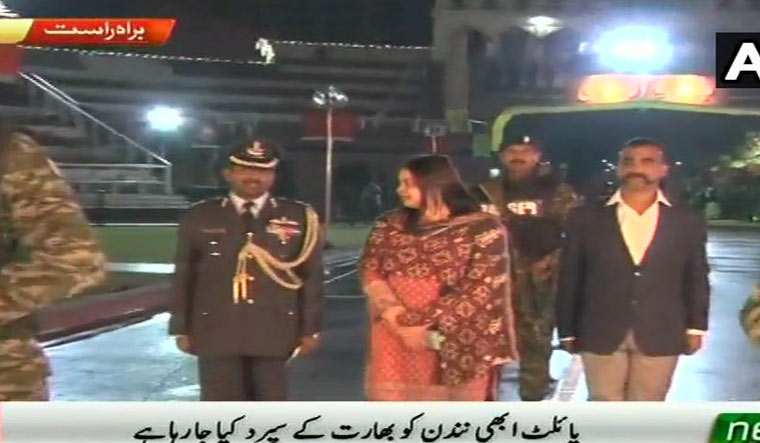 Indian Air Force Wing Commander Abhinandan Varthaman, who was released by Pakistan after being in custody for two days, returned home crossing the Zero line at Wagah-Attari border on Friday night. Hundreds of people had gathered at the border to greet the officer on his arrival.

Abhinandan was detained by the Pakistan Army after his MiG-21 Bison jet crashed in Pakistan occupied Kashmir (PoK) on February 27 during a dogfight with Pakistan Air Force jets.

"Welcome Home Wing Commander Abhinandan! The nation is proud of your exemplary courage. Our armed forces are an inspiration for 130 crore Indians. Vande Mataram!" Prime Minister Narendra Modi tweeted soon after the officer was handed over to India.

Abhinandan crossed the border around 9.20 pm after Pakistan changed twice the timing of handing over of the wing commander. Earlier, he was accompanied by IAF Group Captain Joy Thomas Kurien to Indian High Commission in Pakistan.

In a short press briefing, Air Vice Marshal R.G.K. Kapoor said the officer has returned safe and will undergo a necessary medical check up since he had to eject from a fighter aircraft.

Defence Minister Nirmala Sitharaman tweeted: "Proud of you Wing Commander Abhinandan Varthaman. The entire nation appreciates your valour and grit. You held your calm in the face of adversity. You are an inspiration to our youth. Salute. Vande Mataram."

Earlier, in order to restrict the crowd, the daily Beating the Retreat ceremony at Attari-Wagah Border was cancelled on Friday.

Islamabad's decision to release Abhinandan was announced by Prime Minister Imran Khan at a joint session of Pakistan parliament on Thursday. "We have an Indian pilot. As a peace gesture, we will release him tomorrow," he said.

He also said: "Yesterday I tried to call (Prime Minister) Narendra Modi to say that we don't want escalation. Our push for de-escalation doesn't mean we are afraid."

Earlier in the day, media reports said that Pakistan had turned down a request by India to send back Abhinandan by aerial route and not through the Attari-Wagah land border.

The release of the pilot is expected to defuse the tension between the two nuclear-armed neighbours, which had escalated after a fleet of IAF Mirage 2000 fighter jets crossed the border and pounded a major terror training camp of Jaish-e-Mohammad at Balakot on February 26. India's operation was in response to a suicide terror attack on a CRPF convoy at Pulwama on February 14, in which 40 jawans lost their lives. The JeM had claimed responsibility of the attack.

Leaders of various parties showered praise on the IAF pilot who had downed one Pakistani F-16 fighter during the dogfight before his MiG jet was shot.

"Welcome back Wing Commander Abhinandan. I salute your bravery and the courage of your family. India is proud of you," tweeted Delhi Chief Minister Arvind Kejriwal.

“I wholeheartedly welcome #AbhinandanVartaman back home. Though I would have loved to go and receive him, I did not do so in view of the existing Defence protocols. Hope to see you soon officer! #WelcomeHomeAbhinandan,” tweeted Captain Amarinder Singh, the chief minister of Punjab.