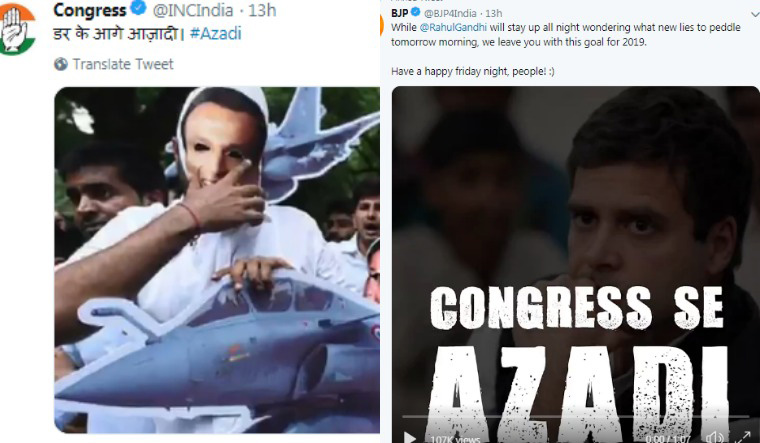 Six months after the BJP and Congress released competing videos to 'explain' the contentious Rafale deal, the two parties are at it again. This time, both have seemingly upped their game and used the rap song Azadi from the Bollywood movie Gully Boy to release parody videos. The Azadi song, in turn, was inspired by JNU student leader Kanhaiya Kumar's iconic speech of 2016.

While @RahulGandhi will stay up all night wondering what new lies to peddle tomorrow morning, we leave you with this goal for 2019.

The BJP was first off the blocks, with its Twitter handle releasing the saffron party's Azadi video at 10.37pm on Friday. Exactly 31 minutes later, the Congress released its Azadi video.

While the music and chants of the Azadi song are common for both videos, the two parties have used those lyrics of the 2.30 minute-long song that suit their narrative. So, the BJP video uses the lines Ghar mein hai chaar phir rooms tere 8 kyun with images of a news report claiming Sonia Gandhi stays in a larger house than Prime Minister Narendra Modi. Not surprisingly, the Congress video doesn't feature these lines.

The Azadi videos shows the two parties highlighting scams that allegedly occurred in each other's tenures and claims of cronyism. The BJP's video shows the 2G and Commonwealth scams and the projection of Robert Vadra, while the Congress's video refers to the Rafale deal, Modi's links to industrialist Gautam Adani and allegations against BJP chief Amit Shah's son Jay.

While the Azadi videos show both Congress and BJP are ramping up their social media narrative to reach out to more voters, it is welcome publicity for Gully Boy, which releases on February 14. And the BJP may have to deal with some uncomfortable questions given the Azadi slogans had their origins in a speech by Kanhaiya Kumar, a vocal critic of the party. The Congress's Azadi video features scenes of the protests at JNU, which erupted three years ago.

In August, after the BJP and Congress released their 'Rafale explainer' videos featuring the context of a housing society buying locks, the Aam Aadmi Party also released a similar video. So, perhaps, we could have a third political Azadi video to look forward to!