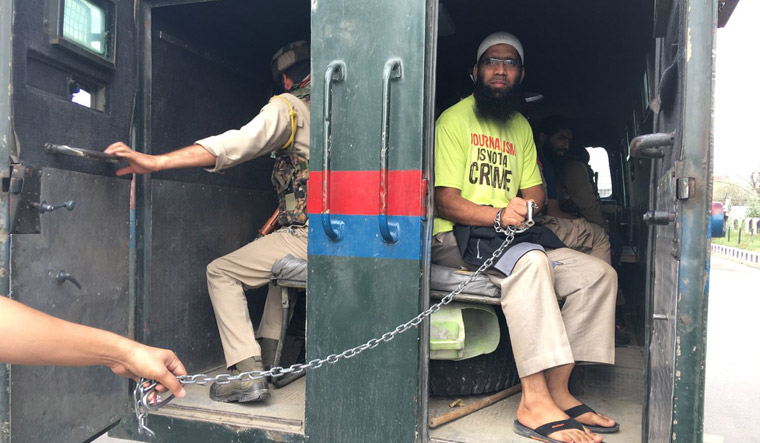 After keeping him in detention for six months, the Jammu and Kashmir Police have filed a charge-sheet against journalist Asif Sultan for allegedly sheltering militants who killed a constable in a shootout in August 2018 at Batamaloo in Srinagar. Nine others have also been named in the charge-sheet.

A police spokesman said the police submitted the charge-sheet in respect of case FIR No. 173/2018 of Batamaloo police station.

“The FIR pertains to the incident dated 12-08-2018 wherein militants hiding in a residence at Diyarwani, Batamaloo in Srinagar, fled from the spot after indiscriminately firing at a police party, wherein one police personnel, Sgt. Parvaiz Ahmad, got martyred,” the spokesman said in a statement.

He said after the conclusion of the investigation, the charge-sheet had been filed before the competent court by Srinagar Police under sections of the IPC, Unlawful Activities (Prevention) Act and other relevant statues.

''They have been charged for their alleged role in hatching a criminal conspiracy for the militant act, harbouring militants and giving support to the proscribed organisation besides substantive offences of law,” the official said.

On August 31, police had raided Sultan's House at Firdousabad in Srinagar and took him to the Batamaloo police station. The police had confiscated his laptop. Sultan, who was working as assistant editor of news magazine Kashmir Narrator, was later accused of harbouring terrorists in the FIR by police. The police also claimed it had found some incriminating material on his laptop.

On September 9, a court in Srinagar sent Sultan and three others named in the FIR to judicial custody for two weeks.

The Kashmir-based journalists' unions had called for an impartial inquiry into the allegations against Sultan and stressed that a journalist's material gathered for reporting cannot be tantamount to ''incriminating evidence''.

The calls for his release, however, have been ignored by the authorities. According to sources privy to the developments concerning the case, the police was compelled to file the charge-sheet as Sultan has been languishing in jail for nearly six months without any charge-sheet having been filed by the police against him.

Sultan's family has challenged his detention in court. During the last hearing, the counsel for the police had not attended court.

The case is being heard in the Jammu and Kashmir High Court by a single judge. The case will come up for hearing again the next week.

The photos of Sultan, being handcuffed and wearing a T-shirt that read, 'journalism is not a crime', had gone viral and had evoked a wave of sympathy for him. In another photo, he was seen wearing the same T-shirt and hugging his six-month-old daughter.

The editor of Kashmir Narrator has denied the charges levelled against Sultan. They are confident that Sultan will emerge unblemished from the trial.