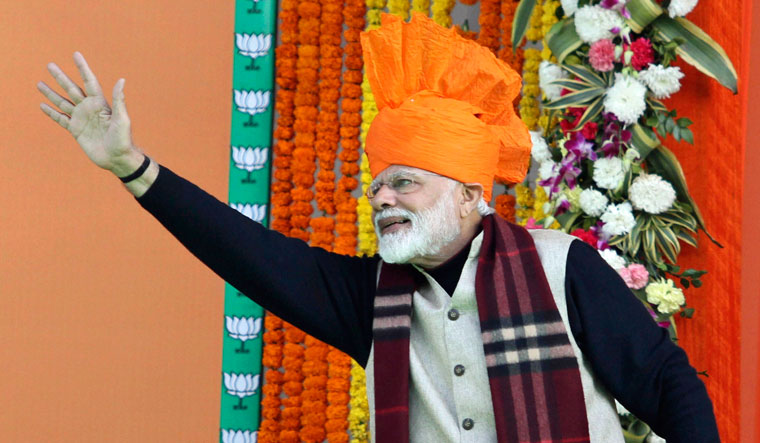 Prime Minister Narender Modi during a public rally after laying the foundation stone of AIIMS and Jammu-Akhnoor four-lane Highway and other projects at Vijaypur in Samba District of Jammu and Kashmir, on Sunday | PTI

Prime Minister Narendra Modi Sunday attacked the Congress for using farm loan waivers as a gimmick ahead of the election to win votes and said the party's previous such initiative benefitted only middlemen and select farmers.

He listed out various measures, including direct income support of Rs 6,000 to farmers cultivating on up to five acres of land, being taken by the central government to ensure welfare of the peasants neglected by the "previous governments".

"Congress always left out 70-80 per cent poor farmers from the benefit of their farm loan waiver scheme. What about these people?" he asked.

Modi laid foundation stones of various development projects worth Rs 6,000 crore which include setting up of All India Institute of Medical Sciences (AIIMS) in Vijaypur, a bridge over river Chenab, pollution abatement project on rivers Devika and Tawi, a campus of Northern Regional Centre of Indian Institute of Mass Communication and University Institute of Engineering and Technology in Kathua.

Addressing a public rally in Vijaypur, the prime minister cited proposed amendments in the Citizenship Bill saying the country stands with those who faced persecution on the basis of their faith.

"We have brought the matter of change in Citizenship Bill with a commitment. Those (people) who had to part with India due to some condition in 1947, if they face persecution on the basis of their faith then the country has to stand with them," he said.

The Citizenship Bill seeks to grant nationality to non-Muslims who fled religious persecution from three neighbouring countries—Afghanistan, Pakistan and Bangladesh and entered India before December 31, 2014.

Protests were witnessed in different parts of the country over the Bill which has been passed by Lok Sabha.

Modi also talked about a "very emotional issue" of Kashmiri Pandits, saying he has been bearing the pain of their exodus.

He said the central government is committed to ensure respect and dignity of the displaced community.

"The pain that they had to undergo. That they had to leave their homeland. I have never said this before but I have been feeling this pain of their within me," the prime minister said.

Modi said the government is going to build 14,000 bunkers in border areas of Jammu to ensure safety of people.

"The government is dealing strictly with the terrorism (being faced by the state)," he said.

He accused the Congress of lying on the issue of 'one rank, one pension' (OROP) to retired defence personnel.

"How much they (Congress) lie? They talked big on the issue of welfare of ex-servicemen and allocated a meagre Rs 500 crore whereas this government has allocated over Rs 35,000 crore which included arrears worth Rs 11,000 crore," he said.

Modi said that if required attention had been given to the issue of Kartarpur corridor, then the pious land of Guru Nanak Dev would have been part of India.

The corridor, whose foundation stone was laid late last year, will connect Darbar Sahib in Pakistan's Kartarpur—the final resting place of the Sikhism founder Guru Nanak—with Dera Baba Nanak shrine in India's Gurdaspur district and facilitate visa-free movement of Indian Sikh pilgrims, who will only have to obtain a permit to visit Kartarpur Sahib, established in 1522 by Guru Nanak.

During the address, the prime minister hit out at so-called "wise and big people" in the opposition parties for ridiculing his government's Jan Dhan scheme of financial inclusion, saying the bank accounts opened under it will help in ensuring that the benefits of recently-announced PM-Kisan Samman Nidhi programme reach its right beneficiary.

"Those ridiculing me have now realised what these accounts will be used for," he said.

Referring to upcoming general elections, the Prime Minister said the 'jung (war)' of 2019 is for taking country ahead.

He said the PM-Kisan scheme has been allocated Rs 75,000 crore annually which will mean Rs 7.5 lakh crore will be deposited in farmers' account in next 10 years.

The scheme aims to cover 90 per cent of farmers who have less than five acres of land and Rs 6,000 will be transferred to their accounts annually in three equal installments of Rs 2,000, Modi said, adding that efforts were being made to ensure release of the first installment at the earliest.

Attacking the Congress for promising farm loan waivers, he said that it is a temporary solution for the problem which the Congress uses to win elections only.

The Congress had promised to waive loans of farmers in 2008-09 which were in the range of Rs 6 lakh crore but when it came to power it only gave relief in loans worth Rs 52,000 crore, he said.

"CAG report found that about 30-35 lakh people who received these waivers were not even eligible to get it," Modi said at the rally in Vijaypur near here.

Ridiculing the loan waiver scheme announced by the new Congress dispensation in Madhya Pradesh, the prime minister said some beneficiaries have been given cheques of Rs 13 only.

"People know the track record of country's 'naamdar'. They get 'fever' of loan waivers just before elections...They try to act as 'messiah' of farmers by announcing farm loan waivers once in 10 years," he said referring to the UPA's 10-year rule between 2004 and 2014.

Ironically, the BJP had also announced loan waivers for farmers in Uttar Pradesh ahead of assembly elections in 2017.

After assuming power, Chief Minister Yogi Adityanath had announced loan waivers of up to Rs 1 lakh for small and marginal farmers.