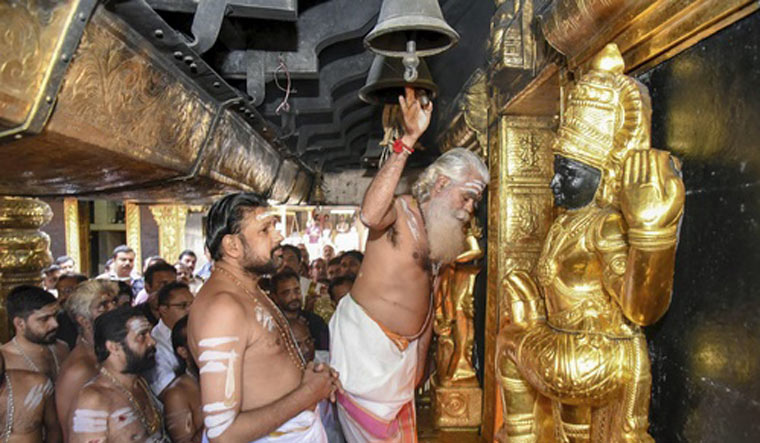 Sabarimala priest Kandararu Rajeevaru has closed down the Lord Ayyappa temple on Wednesday. The decision comes shortly after two women in the barred age group successfully completed their pilgrimage to the hilltop shrine on Wednesday. Sabarimala priests had earlier famously threatened that the rituals would be stopped if women in the menstrual age group enter the shrine of Lord Ayyappa.

The temple will be opened only after a one-hour purification rituals that are being held in the temple. Devotees have been evicted from the temple premises.

The move comes soon after Kerala Chief Minister Pinarayi Vijayan confirmed that two women, in the barred age group, have entered the Lord Ayyappa Shrine in Sabarimala early morning on Wednesday. The police have also confirmed the news.

DGP Loknath Behra on Wednesday said that he has asked for CCTV footages to be submitted for further examination. The development comes hours after lakhs of women in Kerala stood should-to-shoulder across the national highways, creating a 620 km-long human 'wall' from the northern end of Kasaragod to the southern tip in thiruvananthapuram on Tuesday as part of a state-sponsored initiative to uphold gender equality.

According to early reports, two women in the menstrual age group entered the Lord Ayyappa shrine in Sabarimala early Wednesday morning. Two women, Bindu and Kanakadurga, successfully completed their trek and worshipped the deity inside the temple. It is yet to be confirmed if the women are in the barred age group; however, they claim they are below 50 years of age. Bindu hails from Kozhikode, while Kanakadurga is from Malappuram district in Kerala.

The women reportedly arrived at Pamba, the base station, around 1 am on Wednesday and held darshan around 3.30 am. The duo claimed that Kerala police had ensured their security en route to Sabarimala on Wednesday. Bindu told media that they entered the temple via the VIP lounge and did not take the traditional 'pathinettam padi' (holy steps leading to sanctum sanctorum). She added that a few devotees had identified them while they were on their trek. However, there were no resistance and they completed their trek.

This is the second time that both the women attempted visiting the Sabarimala hill shrine. Their first attempt on December 24 was abandoned after protests from Ayyappa devotees.

Reportedly, the police ensured that the women's trek was carried out in a discreet manner. The Travancore Devaswom Board, the administrating board of the Sabarimala temple, however, claimed ignorance of the development.

Women in the menstrual age group of 10 to 50 years are traditionally barred from visiting the Sabarimala temple. However, the Supreme Court had, on September 28, lifted the ban on entry of women in the barred age group. This had led to widespread protests across Kerala.