After SP-BSP in UP, another regional outfit jettisons the Congress 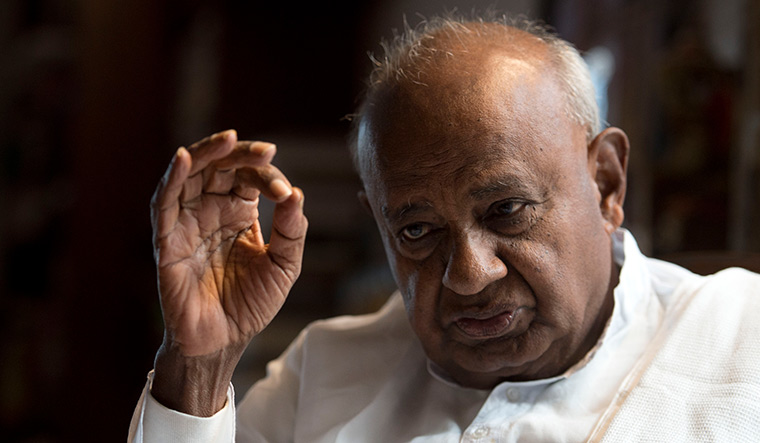 JD(S) patriarch H.D. Deve Gowda has sent a clear message to the Congress that his party plans to face the upcoming parliamentary elections alone.

Former MLC and JD(S) spokesperson Ramesh Babu, on Wednesday, said, “The party has come to a decision. We will contest from all 28 parliamentary constituencies. It will be a friendly match, but it does not mean we will give up our seats. We will fight it cordially, and abstain from allegations and counter-allegations.  We will fight to our individual strengths," said Babu.

Stating that the decision was the outcome of a series of meetings chaired by former prime minister H.D. Deve Gowda, Babu said, "He [Gowda] held a meeting of party workers in about eight districts including Bengaluru, Bengaluru Rural, Kolar, Chikkaballapur, Chikmagalur, Chitradurga and Tumkur. Similar meetings will be held across the remaining districts. Once again, when we say a friendly match, it does not mean seat-sharing. We are confident of giving a tough fight in 15 constituencies".

Babu also mentioned Bengaluru North, Mysuru, Mandya, Hassan, Tumkur, Chikkaballapur, Kolar, Bijapur, Raichur, Shimoga and Bidar as the constituencies where the party will prove to be a tough contender.

Interestingly, the JD(S) and the Congress, which entered a post-poll alliance to form the coalition government in May, had already announced a pre-poll alliance for the Lok Sabha elections. But, the negotiations yielded little in terms of seat-sharing, say sources, adding that the Congress is not keen to part with 9-10 seats out of the 28 seats. This could have upset the JD(S).

Both allies seem to be mum over the agreement signed between them, which had also spelt out a 2:1 power-sharing formula to divide the cabinet berths, portfolios, boards and corporations. The seat-sharing gesture continued even during the five bypolls (including two Lok Sabha seats) which proved beneficial for both parties. However, the growing friction between the allies, despite a coordination committee headed by former chief minister Siddaramaiah, has led to both parties alleging "arbitrary" decisions by the other. The legislators on both sides allege "neglect" by the government.

The JD(S) decision comes at a time when the Congress is grappling with dissidence, following the recent cabinet expansion. This could be a setback for the Congress, which is desperate to whip up a grand alliance to take on the BJP in 2019.

The move is being read as the Vokkaliga strongman's bid to expand his political constituency in the state capital. At present, the BJP holds three seats—Bengaluru North, South and Central—while Congress's D.K. Suresh holds the rural seat.