Solih, who is in Delhi, will return with a 1.4 billion dollar financial assistance 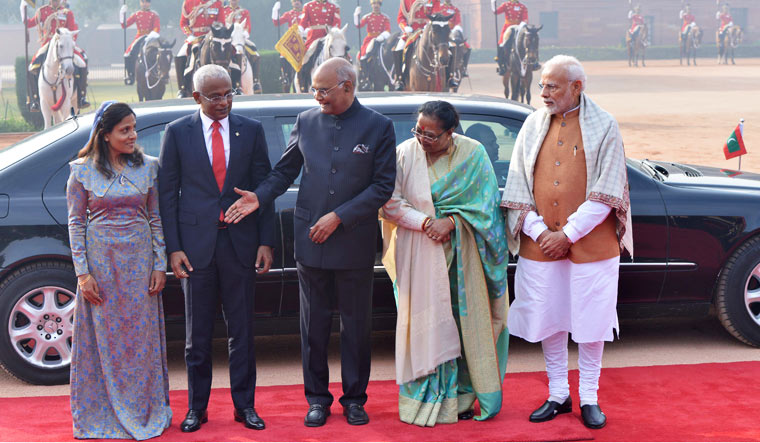 India has rolled out the red carpet for Maldivian president Ibrahim Mohamed Solih, who is on a three-day state visit, his first overseas tour after resuming office this November. Not only is he staying at Rashtrapati Bhavan as a special guest of the president, he will also return on Tuesday with a 1.4 billion-dollar financial assistance.

The return of democracy in the Maldives and the ouster of pro-China Abdulla Yameen have come as a huge relief to India, which was watching the developments in the island nation with bated breath. In fact, Prime Minister Narendra Modi had made a quick visit to Male for Solih's swearing-in ceremony. Modi was the only head of state/government to be invited.

Solih is visiting India with his wife, Fazna Ahmed, and a delegation comprising five ministers and senior government officials, and a big business delegation. The two countries signed a slew of agreements, including those for facilitating visa arrangements, and Memoranda of Understanding (MoUs) on cultural cooperation and establishing mutual cooperation to improve the ecosystem for agri-business. They also made a joint declaration of the intent of cooperation in information and communications technology and electronics.

“Prime Minister Modi reiterated India's assurance of all possible support to Maldives in realising its aspirations for socio-economic development, and strengthening of democratic and independent institutions,'' said a press statement. The 1.4 billion-dollar financial assistance will be in the form of budgetary support, currency swap and concessional lines of credit. The Maldives was the only country in South Asia to which India has not extended aid and Lines of Credit during the last five years. This was because of Yameen's aggressive anti-India stance. Solih, on the other hand, reaffirmed his government's “India First Policy''.

India also announced that 1,000 additional slots will be created over the next five years for training and capacity building for Maldivians in diverse fields including judiciary, policing and law enforcement, sports, media, e-governance, innovation and financial management. India has noticed that training people is a good long-term approach to building ties, since those men and women, who later reach top positions, always remember their training and alma mater with fondness. This approach to foreign policy has worked best in Afghanistan, though India does it with all south Asian countries.