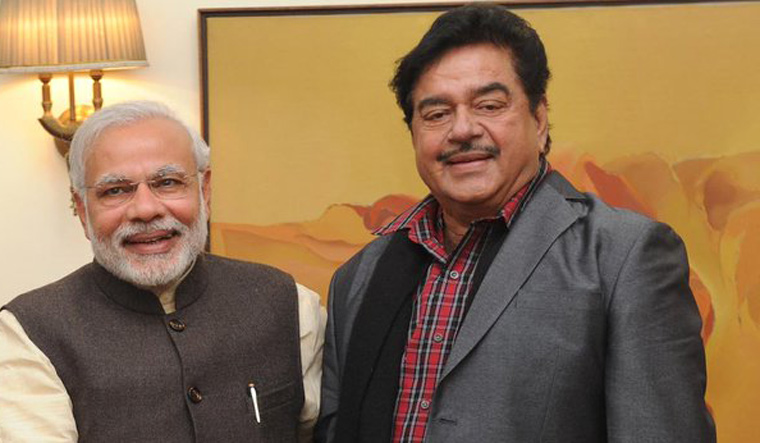 Veteran BJP leader and yesteryears Bollywood star Shatrughan Sinha is back in the limelight after he posted a series of tweets on Wednesday that appeared to be critical of Prime Minister Narendra Modi in the wake of the assembly election results.

Kahin khushi kahin gam ! Didn’t I warn you about the writing on the wall! And that truth shall prevail?
Hard hitting, hard core &.well deserving! Truth has prevailed at last.
Hearty congratulations to all our people on the spectacular most expected and awaited victory.

Shortly after it became clear the Congress was winning in Rajasthan and Chhattisgarh, Sinha had tweeted on Tuesday, “Kahin khushi kahin gam! Didn’t I warn you about the writing on the wall! And that truth shall prevail?” before congratulating “all our people on the spectacular most expected and awaited victory”. He also tweeted, “Those who have lost, thanks to their arrogance, poor performance or over ambition - also deserves heartfelt condolences.”

While Sinha's tweets of Tuesday were vague, the posts on Wednesday morning were arguably more pointed, perhaps after it became clear the Congress was set to rule Madhya Pradesh. Sinha tweeted, “Now please tell us who’s ‘Pappu’ and who’s turned out to be the real ‘Feku’!”. 'Pappu' has been a term frequently used by BJP supporters to describe Congress chief Rahul Gandhi in an attempt to portray him as bumbling and foolish, while Modi has been frequently called 'Feku' by those who accuse him of making fake promises.

and his mother, whom you allegedly & tastelessly called by a name which is unconstitutional, immoral & illegal - a most derogatory term - Vidhwa (widow), have proved a big point?
This utterance has been condemned by everyone and certainly not appreciated by anyone.

In the same tweet, Sinha went on to praise Rahul, describing him as “dashing, dynamic and of course charming”.

Without naming Modi, Sinha went on to criticise the prime minister's alleged reference to Sonia Gandhi as a widow in a campaign rally in Rajasthan. Sinha wrote, “Don’t you think Rahul Gandhi and his mother, whom you allegedly & tastelessly called by a name which is unconstitutional, immoral & illegal - a most derogatory term - Vidhwa (widow), have proved a big point?” Sinha also praised Rahul's “entire” team for the electoral success.

Sinha concluded by saying his posts “must be taken in the right spirit of sportsmanship. After all, our opponents are not our enemies but belong to the same society/nation”.

Since the election of the BJP-led government in 2014, Shatrughan Sinha has emerged as a persistent critic of Modi on issues such as the Rafale deal, demonetisation and violence by gaurakshaks. His critics have alleged Sinha has been bitter at being sidelined from a ministerial position. In October, it was reported that for the next Lok Sabha polls, the Samajwadi Party was open to putting up Sinha as a contestant against Modi in his constituency of Varanasi.

Despite his persistent criticism, Sinha has frequently reaffirmed his loyalty to the BJP and Modi. He had voted for the Modi government during the no-confidence motion in July. Despite the constant criticism, the BJP has not acted against him. Whether the latest barbs against Modi, and praise for Rahul, will mean the 'status quo' for Sinha continues remains to be seen.