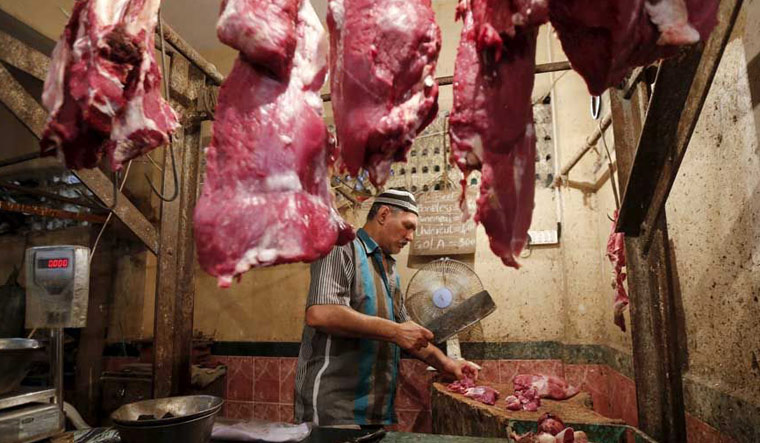 The Shiv Sena and another Hindu organisation claimed to have forcibly shut around 400 meat and chicken shops at different locations in Gurgaon on Wednesday, demanding that they remain closed during Navratri fasting period.

They said 50 per cent of the meat shops in Gurgaon are already closed amid fears of clashes as such a 'closure' exercise is launched every year around Navratri since the BJP came to power in 2014 at the Centre and in Haryana.

State president of Hindu Sena Ritu Raj said, "The Hindu organisations will continue their effort throughout Navratri. The next target is new Gurgaon where there are a large number of meat shops."

The majority of the meat sellers used blinds to cover their shops during Navratri. However, the Sena and other Hindu outfits have threatened to close them down too, sellers alleged.

"We have requested and served notices to every meat-selling outlet to shut shop during Navratri. This time, we have not served notices to restaurants, like KFC and other chains, as them serving chicken cannot be seen in the open," Shiv Sena's Gurgaon in-charge Sanjay Thakral told PTI.

The party workers have also asked owners of non-vegetarian food outlets to shut shop during Navratri, which is observed for nine days.

"We have requested every meat shop owner to close their outlets. Sixty shops have been shut. If the rest 940 shops remain open, then we will have no option but to forcefully shut them down like we did in the previous couple of years," Thakral said.

There are nearly 1,000 meat and chicken shops in Gurgaon.

A dispute emerged during the march by workers of Hindu outfits on Wednesday morning to close the shops during Navratri and local police arrested some of the leaders.

"We have arrested four leaders of Hindu organisations during the march. An FIR has been registered against them under relevant sections of the IPC for disturbing peace. Further investigation is under way," Gurgaon police PRO Subhash Bokan said.

Asked if the meat shops were forcibly shut, DCP (crime) Sumit Kuhar said, "We are looking into the matter. No one is authorised to take law in their hands. We will not let anyone forcibly close down meat shops during Navratri. If anyone wants to voluntarily close his shop, then it is up to him. We have directed all city SHOs to keep a watch on the situation."

He said aggrieved persons must file police complaints in this regard.